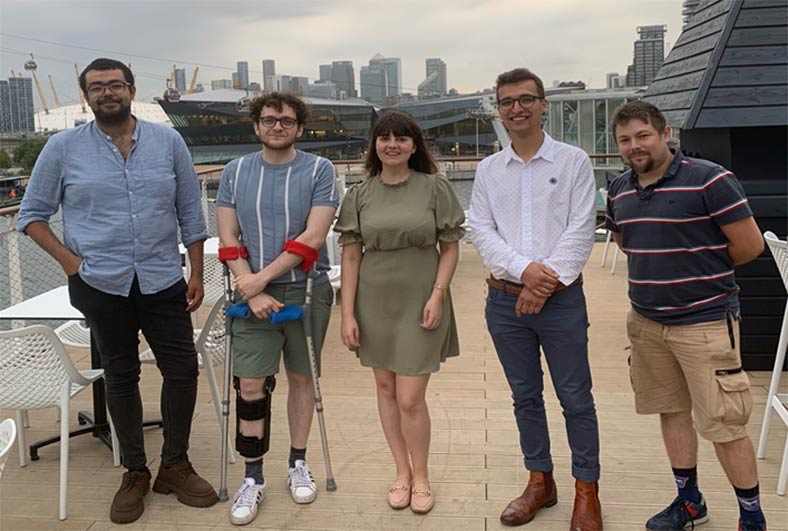 Having a place to share ideas, find support or hold those in power accountable for their actions is perhaps more important than ever for journalists – particularly for those working in City Hall covering the high-pressure political sector.

We catch up with City Hall ‘lobby’ founder Josiah Mortimer who, alongside journalists from ITV, BBC, MyLondon, the Evening Standard, LondonWorld and Bauer Radio, is working to improve the new base of operations in Newham and ‘shine a brighter light’ on London politics.

What sparked the formation of City Hall Journalists?

Having worked in Parliament’s press gallery for a couple of years, I found it to be a really useful and supportive network. When City Hall moved east to Newham earlier this year, it got me thinking about provisions for reporters in the new building – which aren’t quite up to scratch (I know, tiny violins in the background!).

Coverage of City Hall is so vital for Londoners and the devolution agenda nationally. The Mayor and GLA as a whole have a £19bn budget with huge powers over policing, the fire brigade, transport and more. Often people say that reporting in the UK is ‘London-centric’. This isn’t quite true – it’s Westminster-centric but a lot of what happens in devolved politics goes ignored.

Why is it important to have this sort of group?

There aren’t many of us covering City Hall, so it’s great to be working together to speak with a louder voice, improve transparency and build the profile of GLA reporting. I wanted to get this network off the ground to shine a brighter light on London’s politics. Hopefully we can bring some of the best of the Press Gallery to The Crystal, adapted for today.

What do you hope to achieve with the lobby moving forward?

For now it’s a space to share tips, knowledge and hopefully help us get more and better answers from those in charge. We’ll be able to speak with one voice, and I hope it adds a bit more clout to the work my colleagues do.

What is a typical working day like for a journalist that covers City Hall (if there is one!)?

Typically it will involve watching a committee hearing – whether that’s economy, planning, health or oversight/scrutiny. We work closely with the Assembly Members who are a font of knowledge on City Hall, and are – like us, in a way – there to scrutinise the Mayor, so there’s a lot of interaction there. The Mayor has a lot of sway over high profile issues like transport and policing so we tend to trawl through new documents and data, and will often do one or two interviews with the Mayor a week. But the GLA impacts all Londoners, so we try to build links with as many community groups, activists, residents groups, unions and so on as possible.

How difficult was it to cover the news from City Hall during the pandemic?

Not as hard as it might have been ten years ago – all committee hearings are broadcast on the www.london.gov.uk site and are worth a watch if you’re a London punter. The set-up is fairly rudimentary but it does allow viewers to pause and make a cup of tea halfway through the twelfth question about the Ultra Low Emissions Zone or the capital’s struggling cultural sector.

You’ve been covering City Hall since October last year, what has been the best and worst bits of the job so far?

The absolute highlight so far was getting to ride on the Elizabeth Line before it opened. It’s a remarkable piece of engineering and obviously Londoners had been waiting for it for so long. I was there on the day it opened too – on the first train from Paddington, following the Mayor and reveling in the transport geekery.

Sometimes the highlights are also lowlights, in a sense – I recently did a London Assembly tour of Brixton speaking to market traders about the cost-of-living crisis. It was moving to hear what they’re going through, and it’s also my patch so great to get to know more of the community.

Or you might do a visit to a new housing estate – I’ve been in a few unfinished GLA-funded homes, plus the massive film set that is the (soon to be redeveloped) Millenium Mills complex in Newham. One thing I’ve enjoyed as an occasional treat is getting the Cable Car over to work at The Crystal. Yes, I should probably get out more.

What was your path into journalism like and why did you want to cover political journalism?

I studied Politics at York, before going off to a paid internship with a publication in Brussels and then moving into PR. I ran communications for the (excellent) Electoral Reform Society, which I loved. But I’d always wanted to write news – setting up a site at school (which they shut down, alas), writing for papers at university, and running Left Foot Forward, which I edited for several years. There’s nothing like breaking news and telling people’s unheard stories. Oh, and an NCTJ is very much worth having – apply to the bursary scheme if you struggle with the costs.

How much do you (and City Hall journalists in general) work with PRs and what is the best way for them to contact you?

I tend to primarily work with non-profit PRs – those at campaign groups and organisations affected by the GLA. In terms of for-profits, that will often be in a reactive way, getting rights of reply or checking facts. I enjoy writing the occasional review so will work closely with PRs for music, food or travel content. On getting in touch, I’m a big fan of chatting on the phone but a Twitter DM is usually a good way in – it’s a good platform for a very succinct pitch. Please don’t send ten identical emails, ha!

What advice would you give to journalism graduates/journalists earlier on in their career who would like to get into this field?
Write, a lot – and try to find your niche or area of expertise. Develop your voice and style through practice and seek out a small outlet/platform where someone will give you feedback. And do apply to paid internships or placements if you can – these days a lot of them are remote but newsrooms are an environment worth getting used to, too. I did three (paid) journalism placements and they were immensely helpful as a learning curve.

To keep up with what the City Hall Journalists lobby is up to, follow them on Twitter @cityhalljournos.