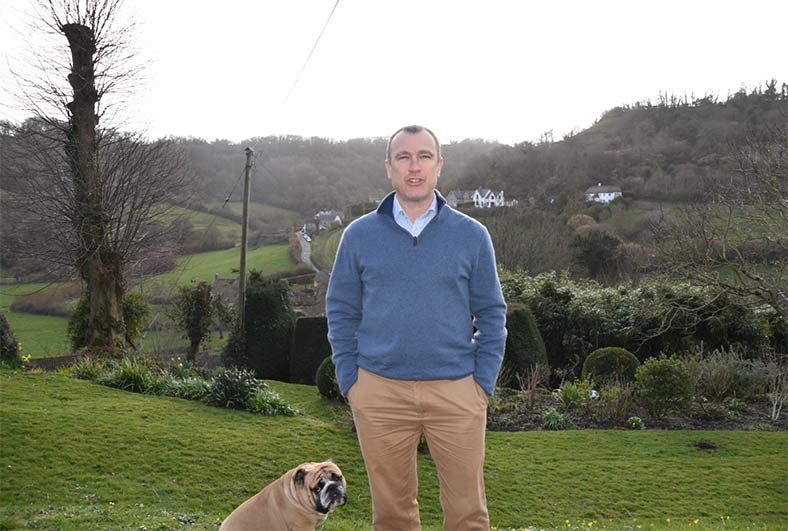 ‘The move from print to digital is going to continue in the way it has over the last 10 years – nothing is going to change or stop that. Our advantage is that we started later.’

Getting to the ‘nub’ of the matter when it comes to the decline of local news is Karl Hancock, who – along with Dean Waghorn – launched Nub News to reconnect communities with what’s happening in their towns, reported by the journalists who know them best. It’s been a steep learning curve for Karl, but with just 15 months in the publishing industry under his belt, Nub News is now reporting from 32 towns across the UK with plans for expansion into 700 towns within the next three years.

‘The industry has gone through a massive change, and we’ve all had to adapt. Now, more than ever, our job is to inform and connect, to go into communities, promote businesses, promote the high street, help and inform,’ says Karl.

‘The way we report news has to change.’

What originally inspired the launch of Nub News?

I was working in the City and had a reunion with a few friends – we’d played football together 28 years ago at Cardiff university. One of them, a computer programmer called Dean Waghorn, came up with the idea and asked me to invest in the company.

We realised there’s so much closure and consolidation in the industry, as fewer people read local newspapers and money in local news falls. We’ve seen towns across the UK where news teams have been moved away, closed down or regionalised as well as the print to digital transition. The only way outlets could make local news pay was to have clickbait articles and Google ads.

How have you structured your editorial process to combat the decline of the local news industry?

We had to come up with a low-cost model, which was pleasant for the eye and hyperlocal for towns. It wouldn’t just be regional news from 20 miles away. We don’t want anyone who clicks through to a story to be disconnected from it; it’s got to be about their town.

Whether there’s been a road accident, or a new chip shop is opening down the road, we write news and publish it as it happens. That’s how people consume news now – Twitter, Google, Facebook, etc. – it’s rolling throughout the day.

We go into towns and speak to the key protagonists – MPs, counsellors, the chamber of commerce, the am-dram society, the sports team. Nothing can go on our site without it being checked by a professional journalist – most content is from them, too.

All the staples of the local newspapers in the past – classifieds, property – we aggregate from eBay, Reed, Zoopla. That frees up the journalists to really concentrate on local democracy or human interest stories from their town.

Do your journalists have to be NCTJ trained? Are you opening up new routes into journalism?

The answer is yes, and no. Originally, I thought we could do that. I soon realized, to be effective in this you really have to be a trained journalist – to understand what makes a story, how to connect with people. All of our staff are fully-trained, qualified, experienced journalists, or journalists straight out of university. With the exception of one, and she’s doing really well – so we’re hoping to put her through journalism training.

Are you working with freelancers at all?

We’re not big enough yet – we’d want to pay them. We’re in 32 towns, but if we got to a hundred, two hundred, three hundred, and there’s a piece that would work across all of our towns, maybe.

Do you work with PRs for sourcing local stories?

We’re on a lot of PR lists and we do use some of that – what we really want is local knowledge and stories about our towns. It has to be targeted to them.

How is your hyperlocal low-cost model working in the current climate?

We have ten guiding principles on our website, and one of them is ‘National issues impacting at the local level’. We can all talk about Brexit, but what does it mean for Honiton, what does it mean for tourism in Sidmouth? With the spread of coronavirus, this is hugely important – everyone is at home wondering what to do, how many people have been infected in Cornwall, where do they need to go? If I look at the local high street, which restaurants and recycling centres are open, what are the supermarket opening times – all of these things have massive impact on the local level. Informing the local people is where we come in, taking a national issue and localising it.

Do you think there’ll still be a place for print in ten years’ time?

All the crisis has done for a lot of these local papers, and others, is to accelerate the change that’s already happening.

What are the big lessons you’ve learned during your time in local news so far?

Hiring the right people was my steepest learning curve. Journalists have to be everything in one – a photographer, a networker, a publisher, adept with social media. The industry has gone through a massive change, and we’ve all had to adapt. I only want to employ journalists who understand that the way we report news has had to change.

The other thing I’ve learned is that regional journalists need to know about their towns – ideally, they have to live in or near them, and really understand what makes them tick. I need to make sure they’re connected to their towns, and that they care about them.

Are you enjoying working in the publishing industry?

I’m really loving it! I really care about local news – I love my job.