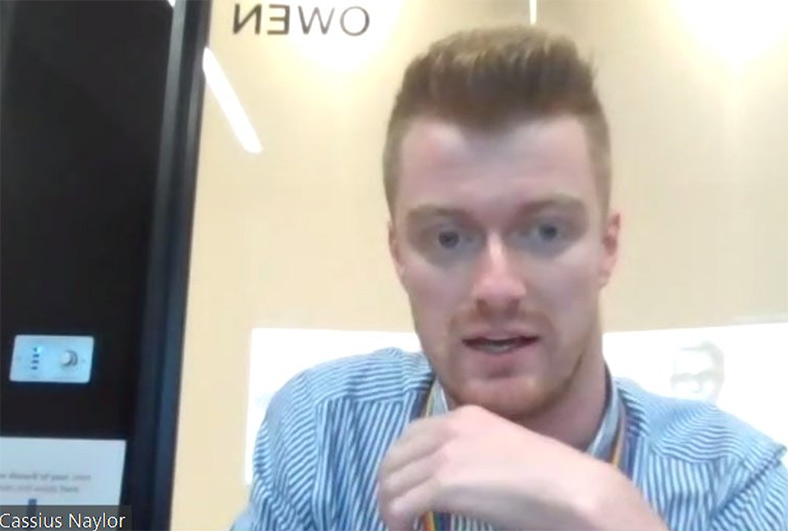 At a time where the reporting of transgender issues in the UK press is at risk of censorship and often covered by those outside of the community, Proud FT is aiming to make a difference across all departments of the Financial Times and the UK media landscape beyond.

Righting the representation of transgender and nonbinary people in the press is just one part of the challenge – ensuring that colleagues and employees feel empowered and safe while in the office is another part of this vital work.

‘As a cisgender man, I can’t pontificate on the safety of women. But trans women are women, and they need to be protected,’ believes Proud FT chair Cassius Naylor, who joined us for our latest accessmatters session to share his work on inclusion as well as advice for those who want to help stem the tide of transphobia in the UK right now.

‘My ‘day job’ is that I support the CMO. The ‘gay job’ is that I chair Proud FT. I was late to join the initiative – at the time, the network was only just dedicating itself to trans inclusion. We were doing our first specialised events and engaging with management alongside moving into a new office.

‘We were just about beginning work on our first global trans inclusion policy. It’s an on-going focus – all of that work is with a view to the ambitious goal of inclusion. I say that’s ambitious, but it’s not terribly, considering the current media coverage of trans issues. This community is the most at-risk and marginalised, yet we’ve all seen how trans issues are being reported in the UK.’

Also co-representing the FT on the steering committee of InterMedia UK, Cassius regularly speaks with those from other publications and hears their concerns regarding transphobia in the UK press. What can those of us working in the UK media, and engaging with it, do to protect and support the transgender community?

‘It’s a tough one for me, because I sit on the other side of the wall from editorial,’ admitted Cassius. ‘And, it’s also easier at the FT, because we don’t really address social issues like The Guardian or The Times.

‘For addressing transphobia in editorial – the first point of advice I’d give to journalists is to talk about it. So much of this is founded on ignorance – I think a lot of it comes from fear. A resource I’d recommend for learning more is the Trans Journalists Association. Recognise ‘dog whistle’ phrases – TERF, gender critical, gender sceptical – and learn how to deal with them. It’s something I have yet to completely crack, myself.

‘We get tied into this conversation about free speech – should it have consequences? I wish I had a more solid answer for that.

‘One important thing is that journalists respect journalists. If you want to have your colleagues advocating for this… I don’t want to use the phrase ‘peer pressure,’ but that’s what it might come down to.

And as for readers who don’t have direct access to those making the big editorial decisions, Cassius believes they have a positive role to play as well:

‘One thing I realised from working in journalism is that there is a lot of attention paid to reader engagement. Every major online piece will have a comment section. This goes for any type of ‘dog whistle’ content you detect – comment on it, make your objection known. Write to the editor as readers if you’re outraged; you have the right and means to express it.

‘At the FT, we’re trying to engage with our readers in a different way. Newspapers are not mouthpieces anymore – it’s incumbent on all media organisations to enter into that discursive debate.

‘So, bother them in the appropriate avenues – don’t contribute to oppression. If this bothers you, you have the right to bother back.’

Find out more about Proud FT and the Financial Times’ other employee networks here and follow Cassius Naylor on Twitter @cassius_naylor.