How to thrive in the digital era: 5 tips from the Future of Media Technology Conference 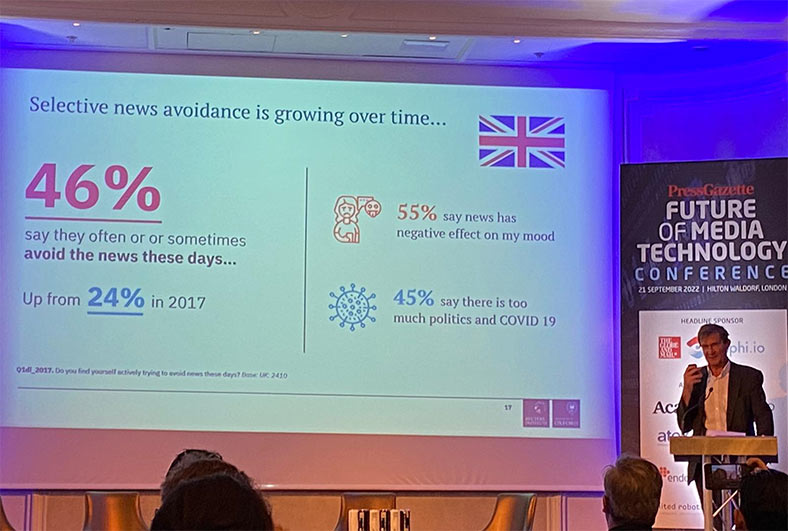 Media organisations and publishers are constantly looking at ways to adapt, enhance and innovate their services and products in the digital age. But with so many avenues now from newsletters to podcasts to branded products, knowing what the best option is is more difficult than ever. Luckily, the Press Gazette’s Future of Media Technology Conference last week tackled many of these issues covering topics such as revenue strategies, audience growth in podcasts and the future of data journalism. Below are five of our key tips from the various sessions on how to thrive in the digital age:

In her keynote speech, Rachel Corp spoke about how the TV bulletin is not yet dead due to the millions that have tuned in to follow the coverage surrounding the passing of Queen Elizabeth II. The success of this she feels has been in part down to the ‘power of the simple vox pop’ which has helped to reflect a wide and diverse range of voices from around the country and Commonwealth. Rachel also feels that protecting eyewitness journalism is key and this can only be done with more reporters on the ground. For broadcast media to be able to continue to thrive then ITN will be accelerating their digital plans but also call for more regulations and checks, especially around social media news.

‘Media brands are loved by people and they want to be part of that with branded products’ – Alex Wood, Managing Director, Europe at Forbes

Revenue strategies from paywalls to advertising to licensing are all common ways of helping to grow revenue for media brands. At Forbes, revenue has grown by 40% in the last year due to a consumer revenue focus which has partly been down to affiliates but also, according to Alex Wood, down to merchandising. This shows people want to be part of the brand and have that connection. Juan Delgado, Chief Executive Officer of Footballco, echoed this by talking of the success of the Mundial branded socks but said any product from a media company needs to be authentic to the brand and stick to their ethos.

News avoidance in the UK has been steadily rising in the last few years with 46% now steering clear of the news, compared to 24% in 2017. This has certainly been the case with younger people who are keen to avoid the negativity of traditional media around topics like politics.  So how do you appeal to younger people and what topics are they interested in? Well the Reuters Institute Digital News Report has found that young people are more interested in issues like identity, social justice, mental health, culture and a range of broader lifestyle topics. Journalism now needs to provide hope, a sense of agency, and empathy and dignity when covering difficult stories. Slow journalism focusing more on explanation and understanding can engage a younger audience, with membership models where readers are encouraged to take part and make a difference themselves. Solutions or constructive journalism, which we discussed last week with Jodie Jackson, is also proving popular as a new accessible format for the modern audience.

‘Companies are starting to take ownership of their own data’ – Markus Karlsson, CEO of Affino

For a while now, publishers have been allowing extra third-party cookies on their websites as a way to bring in more money. This has meant giving away people’s data to more and more people and now Google have announced they will end third-party cookies in Chrome, which poses a problem for many publishers. Markus Karlsson stressed the need for companies to own their data and start prioritising a first party data strategy. This will allow publishers to better understand their audiences and will ultimately lead to a better return on investment with one well placed advertisement rather than five competing ones.

‘Use the robots to do the routine reporting’ – Cecilia Campbell, Chief Marketing Officer at United Robots

Local journalism, as has been well documented, has been struggling for a while with less journalists in the newsroom but still having to cover the same amount, if not more, news. Data journalism and content automation provides an opportunity to free up journalists by letting ‘robots’ produce regular content on topics like new company registrations, traffic and local sport. John Walton, Data Journalism Editor at the BBC, also spoke about automating script for graphs or pieces of content that you know will be recurring, for example changing interest rates or election results. All of this will allow journalists more time to cover stories of interest to them and their readers.