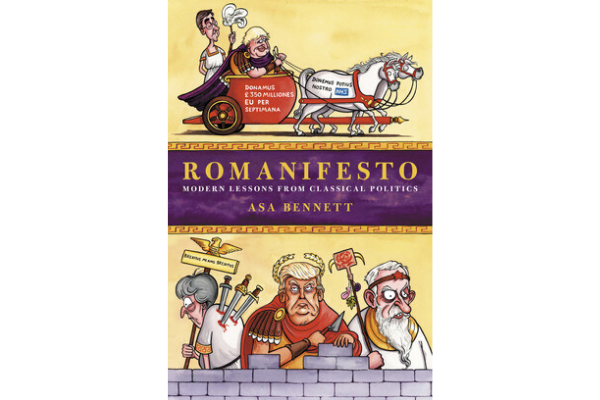 Asa Bennett is Brexit commissioning editor at The Daily Telegraph, writing, commissioning and editing analysis and comment as well as running the daily Brexit bulletin. Right in the middle of all this he published his first book Romanifesto: Modern Lessons from Classical Politics and now that Brexit’s all but done and dusted (!) he’s found a few minutes to tell us about the inspiration behind Romanifesto, why writing a book is tough but worthwhile, and what’s next on his reading list.

Despite the last days of Rome being around 1,500 years ago, the shadow of its empire – and what those who lived in it had to say – still looms large over modern politics. Politics may be less bloody these days, but in many ways it remains the same. This book delves into these similarities to examine what today’s politicos can learn from their Roman predecessors. How did they climb the greasy pole? How did they handle the rough and tumble? What can Boudicca teach us about Brexit? What could Emperor Hadrian teach President Trump about walls? No longer should the answers to questions like these be the monopoly of those who happened to study Classics at university, such as Boris Johnson.

How did you come to write Romanifesto?

I had wanted to write a book for a while, but my professional bread-and-butter of Brexit had made for fiendishly tricky source material. After all, how could I be confident that reams of pages of my book would not be out of date on publication given how fast events were moving on that front? By contrast, one can be fairly confident that ancient history is much more settled. Given that it was my academic passion – having studied it as my first university degree – I was drawn to consider its timeless lessons and to write about the tales of ancient politics that could be set just as credibly in Westminster as in Rome.

Of course, I have also been partly inspired by Latin evangelists like the Prime Minister throwing out Classical allusions to spice up their rhetoric.

Are you working on another book or do you have other projects under way?

I’m still banging the drum for Romanifesto, with appearances this year at various literary festivals like Lewes and Chiddingstone Castle, so I’ve not shifted focus onto another book yet. But that has not stopped me mulling ideas, perhaps a biography of a modern political figure or something else of a more historical bent.

Can you offer any advice to other journalists thinking about writing a book about their own specialist area?

Are there any examples of your own journalism that you’re especially proud of or would just like to share?

I’d have to point to my Romanifesto book again, justifiably as I’ve sought in my writing on modern politics to be assiduously journalistic, and so there are nuggets of Westminster tittle tattle weaved into my prose.

As for my day-to-day Telegraph oeuvre, I’d invite you to peruse it at leisure: www.telegraph.co.uk/authors/asa-bennett

I’m busy enough at the Telegraph, but I’m always happy to hear of freelance writing and speaking opportunities.

If I’m a PR professional with a story or opportunity for you, how should I get in touch?

Email is best, but no harm in picking up the phone or tweeting!

Romanifesto (17/10/2019, Biteback Publishing) is available here in Kindle and hardback. Keep up with Asa’s work here or connect with him on Twitter at @asabenn