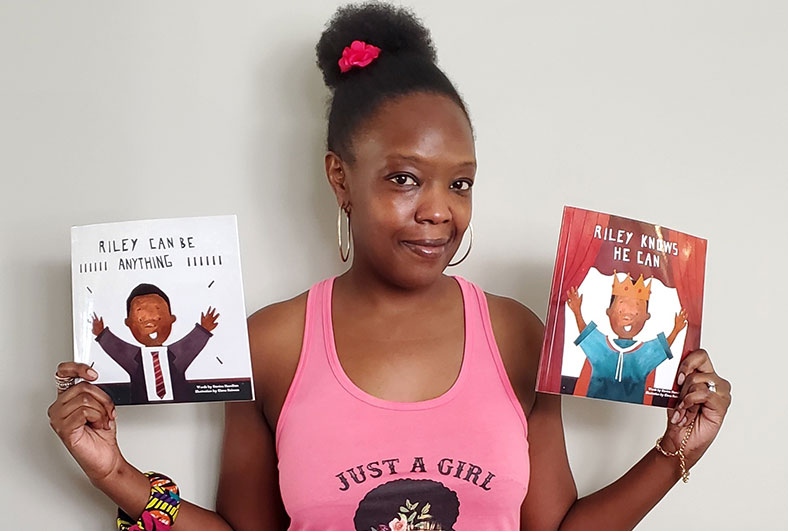 ‘I wanted to write stories that featured black characters, so that black children – including my own – would be able to see themselves reflected in the stories,’ says Davina Hamilton, author of the Riley series of children’s books.

Following time at publications including The Voice, Davina rerouted her love of writing into children’s fiction, her latest being Ella Has A Plan. Read on for what inspired her to create Riley and Ella and the importance of diverse representation in children’s literature.

Can you introduce the Riley series in a couple of sentences?

Riley Can Be Anything follows young lead character Riley who – with the help of his big cousin, Joe – learns that he can be anything he wants to be when he grows up. Riley Knows He Can sees Riley preparing to take centre stage in his starring role as the wise king in his first school play. He’s nervous about the performance, but with the encouragement of his big sister Ella he’s able to take to the stage with kingly confidence. Both books are rhyming stories and both aim to instil self-confidence in young readers.

Could you tell us about how you came to write the books?

Before writing the books, I enjoyed a lengthy career in journalism, so I’ve always enjoyed writing. I had a desire to write a book at some stage and – as cliche as this probably sounds – it was after having my children that I considered writing children’s books. I wanted to write stories that featured black characters, so that black children – including my own – would be able to see themselves reflected in the stories. I also wanted to address the wider issue of diversity in children’s literature, as I believe it’s important for all children to see varied representation in the books they read, so they learn and understand that diversity is normal and not some sort of oddity.

Can you share a bit about your new release Ella Has A Plan?

It’s a rhyming story that follows clever, kind-hearted Ella, who is determined to come up with a plan to stop her two quarrelling cousins from ruining her mum’s big party! The story is targeted towards children aged 6-9 and it promotes the importance of kindness, and learning to get along with one another by trying to find common ground. It also encourages independent thinking among young readers when it comes to problem solving and conflict resolution. All of this is reflected through various generations of a loving black family – cousins, uncles, aunts and a great granddad, who are all part of this family tale.

Do you have plans for other books in the series, or writing in a different genre in future?

I’m sure I’ll write another Riley or Ella book in the future, but my next book will take a slightly different direction. It’s a baby book that will be targeted towards new parents and parents of very young children. It’s a short rhyming story that aims to ease the worries/fears that so many new parents experience. I hope parents read it to their little ones, almost like a lullaby, as it aims to be soothing for both the parent and the child.

What advice would you give to other journalists thinking about writing a children’s book?

Someone once gave me the advice: ‘Don’t get it right, get it written’. I think that’s a really useful tip, especially for writers who tend to procrastinate or overthink the process, in a bid to get everything perfect the first time around. You don’t need to aim for perfection – certainly not in the first instance. Much like journalism, writing a children’s book often begins with an idea. So once you have your idea, start jotting down notes, sentences or any further thoughts that can then be fleshed out and built upon to create your story.

I’m a notorious book-buyer, but I often lack the time to read what I’ve bought! Next on my reading list is I Am Not Your Baby Mother by Candice Brathwaite.

Are there any examples of your everyday journalism that you’re especially proud of or would just like to share?

My journalism career has been so varied and there are many things I’m proud of. I worked as an arts reporter-turned arts editor for black-British publication The Voice newspaper for 14 years and covered too many stories to mention! I’ve also written for publications including BuzzFeed, Huffington Post and gal-dem magazine. In essence, I’m proud to have been able to write about issues that affect/reflect the black community – most recently, articles that discuss the importance of diverse representation in children’s literature.

I still dabble in journalism every now and again, so I’m open to freelance commissions. As an author, I’ve delivered numerous readings and workshops, so I’m always open to those opportunities – though in these times, they’d obviously have to be virtual.

Riley Can Be Anything, Riley Knows He Can and Ella Has A Plan are available here. Follow Davina Hamilton on Twitter @davina_writes and @BooksByDavina and find out more about her work at davinahamilton.com.