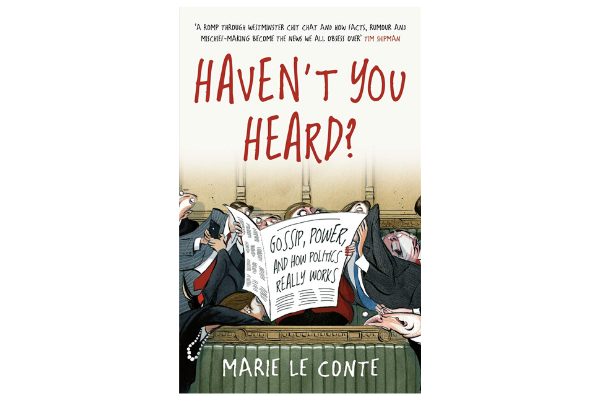 Marie Le Conte is a freelance political journalist who has worked at the Daily Telegraph, Evening Standard, Metro and Buzzfeed. She now writes features for a range of national press, current affairs and consumer titles that ‘focus on the weirder bits of the bubble, and on the human side of Westminster’. Her first book Haven’t You Heard? covers both these topics in-depth and Marie kindly agreed to tell us more about its background and her day to day work.

Haven’t You Heard? Gossip, Power and How Politics Really Works does what it says on the tin, really. Though I know for a fact that Westminster dwellers have enjoyed it too, it is largely aimed at people with an interest in British politics but who don’t necessarily work in the SW1 bubble, and who don’t necessarily fancy reading dry tomes on Westminster.

It’s a fun, gossip-filled book about how things really function in British politics.

How did you come to write Haven’t You Heard?

I’d always wanted to write books and going freelance in 2017 felt like a good time to finally do it. In terms of the topic, I guess that gossip felt like an obvious angle, as I’m a former diary columnist for the Evening Standard. More broadly though, I remember starting to work in Westminster and realising that a lot of it wasn’t at all like what I imagined it to be, and this book was my attempt to bridge the gap between what British politics looks like on the outside and what it actually feels like for the people who work in it.

Any tips for other journalists thinking of writing a book, especially if it’s about their own specialism?

I think the first thing is that you need to be pretty sure of is whether you actually want to write a book, or whether you like the idea of having written a book. The whole process is very intense and always takes longer than you think it will, so unless you actually are very interested in your subject then you should probably give it a miss. It’s easy to think that because you already write for a living, a book can be a logical next step but they’re very different things. That being said, I really enjoyed writing my book and would love to do it again, so absolutely give it a go if you think you may like it!

If you could command a new book deal today but there was a no-politics rule, what would you want to cover?

Well, my two passions are British politics and internet culture – how the internet shapes human relationships, how we engage with each other and how we come to think of ourselves – so it would probably be something on the latter.

What book(s) are you reading right now (or about to pick up)?

I’m currently reading The Stranger’s Child by Alan Hollinghurst as I’m on a bit of a fiction roll at the moment, but in terms of non-fiction I keep meaning to buy Jia Tolentino’s Trick Mirror, which is meant to be very good…

Aside from Haven’t You Heard? what stories or work are you most proud of, or feel represents you best?

I set up the Words By Women Awards with some friends in 2016 and revived them in 2019 – they’re an awards ceremony aiming to celebrate the work of women in journalism and hit out at the lack of gender balance in mainstream award ceremonies. That’s pretty cool. Apart from that, I do think my work speaks for itself – I mostly write longer features on the human side of Westminster, which is a topic few report on.

If I’m a PR professional, business or other source with a potential story for you, can I get in touch (and what’s best for you)?

Please don’t! I don’t mean to be curt but my day-to-day work never, ever involves PRs; I have quite a small niche and even the best-intentioned PR pitches are always wide off the mark. And on the off chance that I do need PR help on something, I’ll definitely be in touch. Just please don’t email me! Thank you!

Are you available for freelance commissions? (if so, what kind of opportunities – writing, events – and preferred contact)

I am! I will happily write features on British politics for anyone who will have me (and will pay!). I also do a fair bit of public speaking – appearing on and chairing panels, giving lectures and keynotes – and always keen to do more.

Haven’t You Heard?: Gossip, power, and how politics really works (Bonnier Books, 05/09/19) is available here in hardback or on Kindle and audio here. You can connect with Marie Le Conte for freelance commissions and speaking opportunities via Twitter @youngvulgarian or marieleconte.tumblr.com