Lessons from the webinar Reflecting Reality: Tackling Diversity in Journalism 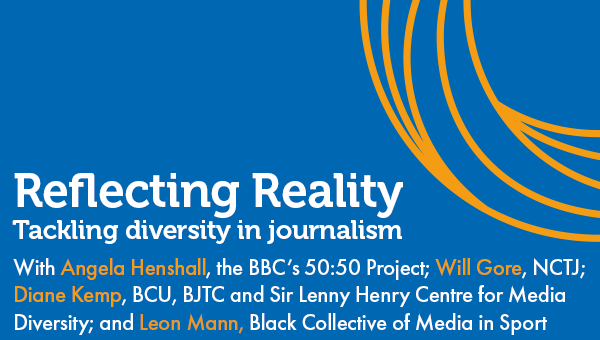 “If you have a diverse workforce in journalism, you are much more likely to produce good strong journalism” – Professor Diane Kemp set the tone for our webinar Reflecting Reality: Tackling Diversity in Journalism with her opening remarks about why there can be no argument that diversity in media truly matters.

Angela Henshall is senior producer for the 50:50 Project, the BBC’s grass-roots initiative to increase female representation in BBC content.

Leon Mann has been a broadcaster at both ITV and the BBC, and has had an extensive career specialising in sport and equality in the sports media; now a sports consultant and film-maker, he is also the founder of networking group the Black Collective of Media in Sport.

Will Gore is head of partnerships and projects at the National Council for the Training of Journalists with particular responsibility for the Journalism Diversity Fund.

Here are a few of the lessons from our panel:

Angela followed up Diane’s remarks by introducing the 50:50 Project, which originated in the BBC newsrooms from reporters and producers on the front line. The project created proof that making content more diverse and including more women is genuinely possible and that the process can be replicated in other organisations, by creating a structure for collecting data and tracking progress.

Describing the project as a “phenomenal success story at the BBC”, Angela agreed with Diane that the argument has moved on from “why should we do diversity” to what should we do and how do we bring it practically in to newsrooms. She went on to say that data has been invaluable in involving the people who make the news as a tool for changing behaviour.

The project grew very quickly from “a smattering of teams” to 90% of news teams and now 600 teams across BBC content: “You’re really unlikely to make progress if you don’t know how you’re doing, through tracking”. The project is now working with universities to roll out the expertise to future leaders and the newsrooms of tomorrow.

Will noted that the NCTJ’s Journalism Diversity Fund can offer a concrete measure of progress through the number of individuals it supports through qualification and into the industry. He warned that the media needs to focus on the goals of diversity rather than “ticking a corporate box”. He said: “We need to think about the sense of diversity as being differences in the viewpoint as much as anything else, differences in the way people think”.

The key is that people from a whole variety of backgrounds bring their experience to bear on the news. Angela agreed that “it’s about making the journalism and the content better” and if you only speak to some of the world that you are reporting on and analysing “you’re restricting your ability to produce really good journalism”.

Talking about the reasons for the launch of the Sir Lenny Henry Centre for Media Diversity on 25 March, Diane said part of the inspiration was the sense that we are “missing an institutional memory”. One of the aims of the centre will be to collate and analyse data from diversity initiatives so that the media can learn what worked and what hasn’t and why. Leon agreed that learning from what’s happened before is essential, citing a shift in attitudes in sport and sport media during his career as a sports journalist and anti-racism campaigner – he no longer has to explain why diversity is important.

However, in recent years data shows that BAME representation in sports media has actually contracted rather than grown. He cautioned that until senior leaders are sanctioned for not delivering on representation, “we will not move forward”.

Put your money where your mouth is

Leon went on to observe that funding remains an issue for diversity initiatives. The Black Collective of Media in Sport was founded in 2009 and has developed considerable expertise through its networking, training and lobbying activities. Some funding has come from the Mayor of London for masterclasses and data conferences, but the BCMS still finds itself offering “free consultancy” and that the sports media needs to resource grass-roots organisations and research better than it does at the moment.

Diane noted that the BJTC identified the difficulties that socially diverse students had in funding placements and has “stepped up” to set up a successful placement assistance scheme to support students.

Look to the future – career progression and mentorship

Will referred to the community news groups the NCTJ is supporting with funding from Facebook, where publishers are changing recruiting strategies to attract more diverse applicants, but this needs to continue through career progression to avoid losing talented people from the industry.

Diane noted that there has been a lack of infrastructure and a reliance on support from individuals which is impractical. Leon offered his experience as a black sports journalist “on the shop floor”. He said: “Get yourself a network – you need somebody who’s been in your position to bounce questions off. It’s hard being in a minority in a very pressured workplace. It’s hard to be your best, most confident self and that makes it hard to progress in this industry.”

Organisations like the JDF, BJTC and BCOMS can provide essential networks, mentorship and advocacy for journalists. Angela advised journalists to “look widely” for advocates who can be found in unexpected places – “a lot of people will be on your side and can offer you fantastic advice”.

Diane observed that if you ask for support that many people in the industry are happy to offer help and Will advised that journalists finding it difficult to get exposure on existing platforms should take advantage of other opportunities to create their own “shop window”, whether that’s through a blog or social media presence, so that “if people are casting around for talented journalists they will find you rather than you finding them”.

We’ll be providing a full recording of the webinar as we can only cover a few of the issues discussed here, but in the meantime our panel have provided suggestions of resources and background on the actions they’re taking to promote diversity in journalism. Let us know if you’ve got other resources to add as we’ll be collating as many as possible in our follow-up whitepaper in April.

Everybody In, co-authored by Diane Kemp, is being republished as a free e-book at leanpub.com/everybodyinbook (available soon)

Our speakers and their organisations: