Media Interview with Sophia Waterfield on fundraising for Paranting Magazine 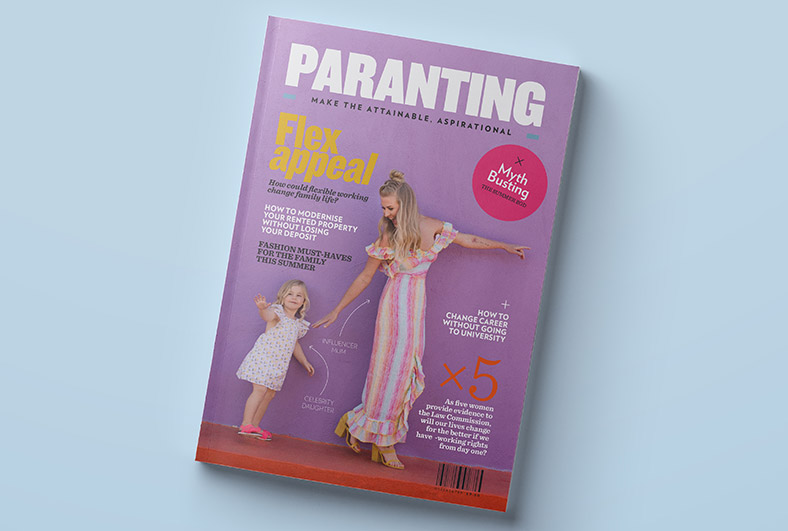 ‘When I read some magazines, I can’t help but think that all the products and events are out of my reach. I live in a small town in the Yorkshire Wolds – I can’t really afford to buy Prada bags’ – today we talk to Sophia Waterfield, who has launched a Kickstarter for a new parenting title that will aim to make ‘the attainable, aspirational’, Paranting Magazine.

Read on for Sophia’s hopes for the magazine, why Kickstarter was the natural choice for securing funding for the launch as well as the challenges, and the good parts, of being a parent in the journalism industry.

Tell us about what inspired Paranting Magazine…

The first idea around Paranting Magazine started when I was about five months pregnant. I was travelling to London to meet up with a university friend and bought myself some magazines to pass the three hours on the train. It used to be such a favourite pastime of mine, but this time it didn’t feel the same. Nothing resonated with me. I couldn’t buy any of the fashion, the beauty items weren’t really suitable for me and the stories didn’t mean much to me. I realised that the magazines weren’t really meant for a working-class, pregnant woman. I got off the train and told my friend: ‘I want to start a magazine for pregnant women’.

But then life got in the way – aka having the baby – and the idea didn’t pop back into my mind until a couple of months ago. I was talking to another freelance journalist, a dad, and he told me that he didn’t feel like any outlets or articles out there were really for him. Maybe when he was single or younger, but not as a father, up north. I said to him that I felt the same way and I started to think about that idea I had three years beforehand. That’s really how Paranting began.

What will the magazine cover and who will it be aimed at?

The mission of Paranting is to make “the attainable, aspirational.” When I read magazines like Stylist – which I have a subscription for – I can’t help but think that all the products and events are out of my reach. I live in a small town in the Yorkshire Wolds – I can’t really afford to buy Prada bags. I spoke to parents in a similar boat – working class, outside of London and dealing with the pressures of balancing work and family life, while also trying to keep their own identity. The truth is that reading glossy magazines such as Glamour, Cosmo and the like just made them feel down for the same reasons I felt on that train three years ago. Also, parents do not have time to watch every news programme or read every internet-viral article – we hardly ever get to have a warm cuppa!

So, Paranting will provide the following: products that parents can afford but we’ll also reject fast-fashion and waste; articles that focus on the important themes in the UK, across the world and in other areas such as health, fashion, beauty, travel and sex and relationships; and will aim to provide a voice for marginalised parents in the UK. I don’t think we’ll get it all spot on in the beginning, but those are our goals.

How did you come to the decision to secure funding via Kickstarter?

Starting up as a magazine is so hard – so many people in the industry are trying to figure it out and we’ve lost some amazing ‘zines due to loss of funding. I could secure some minor pieces of advertising but it wouldn’t be enough to launch on a large scale and pay the industry-average fees for talent – I refuse to pay writers, editors and sub-editors, etc., low fees just because I’m a start-up. There’s not really much in the way of funding, so Kickstarter felt like the only way.

What are a few things that you think would really help and support working parents juggling childcare and working from home?

True flexible working. I’ve tried flexi-working in the past and corporations especially are struggling with it—that’s capitalism for you. When you have children, anything can go wrong on any given day; sickness, sleepless nights, tantrums, doctor’s appointments… the list goes on. So, as a caregiver trying to put your child first, having to sacrifice a day or two of work can leave you with a lot of anxiety. Some parents try to work from home when their children are there, and I have a lot of respect for them for doing it, but I honestly can’t with my son. The work that Mutha Pukka is doing will really help parents have a true work/life balance.

As someone who has worked across many publications and also has lots of PR experience – what are your favourite things about working in the media?

I’ve always loved being creative and coming up with story ideas. When I worked in PR, I wanted to be a media strategist because I loved coming up with creative ideas and looking at where they would be placed. When I worked at Newsweek as part of the SEO and breaking news team, we came up with some really creative ways to tell stories that mattered to our readers while also achieving what we needed to. I also love working with brilliant people – I’ve been very privileged in that respect. When you see them go on to form their own agencies or take up really exciting roles, you just feel so happy for them because you know how talented they are and how hard they’ve worked for it.

What are the worst parts of working in the media?

The pressure can make people, myself included, very ill. I remember someone once saying to me that they didn’t know anyone who wasn’t on anti-depressants or seeking treatment for a mental illness brought on by their work. You also have to, at times, sacrifice your own beliefs to get the job done – I’ve dealt with that a number of times and once walked away from a role because I couldn’t live with my conscience if I continued working for that company.

The comments from readers can be very scary at times. I’ve been ‘fortunate’ that I haven’t dealt with many as a journalist, but I’ve seen other peers, especially female ones, taking a lot of abuse for essentially doing their job.

What insights has working in PR given to your journalism work, and vice-versa?

I was trained as a journalist, so going into PR I had the writing skills and the eye for a story (and, most importantly, what wasn’t).  But the move from PR to journalism again, especially going into a newsroom environment, was very different. There are so many things as a PR you don’t realise goes on in a newsroom and sometimes things do just come down to luck-of-the-draw.

What have been some of the main challenges for you as a media professional working during the pandemic?

Childcare and financial assistance. The amount of work I have had to turn down because of needing to self-isolate because of COVID-19 symptoms. Children pick up a cold really easily and toddlers can get a temperature for numerous reasons, so COVID-19 guidelines have not been helpful when my son has a cold at preschool (he’s asthmatic). The support for parents has also been limited – I couldn’t get the SEISS because I’m a director of my limited company so I had to live off my savings from working at Newsweek when I couldn’t work my shifts. This meant that my Universal Credit benefits were affected and we struggled for a couple of months after lockdown restrictions started lifting in summer 2020. We made it through unscathed thanks to family, but I know others are not in the same position.

What media do you seek out?

I love reading Wired UK and New Scientist magazines when I get some downtime at home. For fashion, beauty and dog training (I own a staffy x cairn called Mr. Chips), I watch IGTV and I have a subscription to Stylist. I’m currently reading books about parenting and autism. TV wise, we’re always on Amazon Prime watching Baby Shark, Hey Duggee and Bing!. Of course, I sometimes get the remote and watch The Simpsons, Family Guy, Poirot and Midsomer Murders. I’m a sucker for a murder mystery and would love to be a private detective at some point in my life.

What’s the best piece of advice you’d give to someone starting out in journalism?

Specialise in a niche or subject area that you are passionate about and throw yourself into emailing the editors in that area, reading the outlets, connecting with experts and getting to know the PRs. That is how you’re going to stand out from the crowd when you’re applying for roles—you might not end up with a job in that area, but you’ll have acquired the skills needed to get any reporter or journalist role.