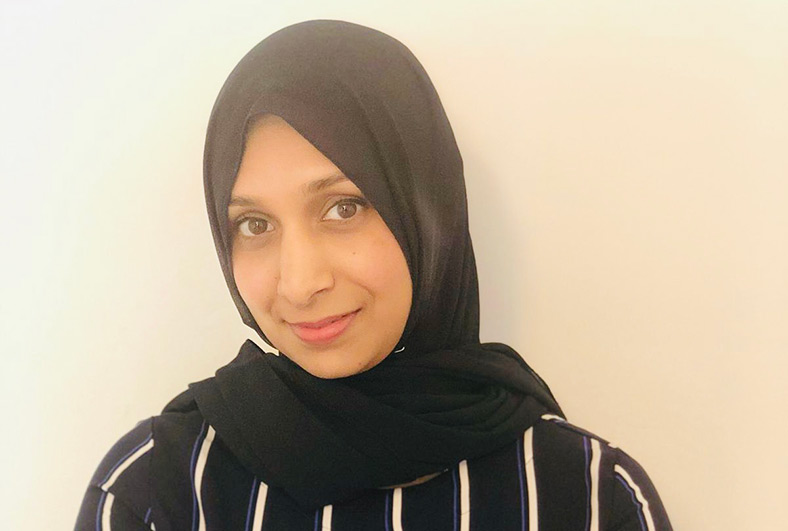 Journalist Tasnim Nazeer has written for publications across national press, has authored books, serves as an ambassador for Peace for the Universal Peace Federation and recently made what the Daily Record has called ‘Scottish TV history’ with her first on-air report for STV News.

While the UK media needs to do better with reflecting the country it reports to, Tasnim has started a Campaign for Better Representation and Diversity – go sign it, and then come back for Tasnim’s experiences of breaking into broadcasting.

‘I think that there is loads of scope for people to use their skills to further excel within the industry and if it’s something they enjoy doing, they should go for it.’

Can you tell us a bit about what spurred you to start the Campaign for Better Representation and Diversity in the UK Media?

For a long time now, I have felt that there needs to be better representation and diversity in the UK media that reflects the national portrait of this country. After I spoke out on the challenges I personally faced as a visibly Muslim woman, trying to transition into broadcast, I was inundated with messages from people in the industry and those trying to get in. Many media professionals have experienced feeling that there is a glass ceiling imposed upon them due to issues such as being judged based on their race, faith, identity or disability. I, therefore, wanted to do my best to campaign for change within the media so that everyone has equal opportunities and that there is better support for those who have experienced discrimination within the media and feel that they were unable to progress for this reason.

The Daily Record wrote about your first report for STV News making Scottish TV history – how did you find all the attention for your first on-air assignment for the station?

I was really surprised that it garnered the attention that it did and was overwhelmed by the amount of support and encouragement from the public, those within the media industry and even local MPs. I think one of the reasons why this was deemed significant was because of the barriers that had been overcome and I hope that people will be inspired to keep on going and work hard to achieve their career goals.

How have your experiences been with breaking into TV reporting?

I think TV broadcasting is generally a competitive area to get into, let alone having to overcome issues of discrimination based on identity with a select few I had networked with in the industry. However, STV News were fantastic from the onset and have set a precedence for other media organisations to follow suit. As journalism is evolving, we need to keep updating skills and I always seek to improve myself all the time. I think this has helped in progressing into broadcasting.

What advice would you give to people also wanting to break into the industry if they don’t come from the white and privileged mould of the majority of reporters represented in the media at the moment?

Keep going. I think that perseverance is key if you want to break into TV reporting. It helps to bring in stories, have access to contacts and gain as much experience and skills as you can to break into the industry. Many times people may feel that they have reached a glass ceiling that they can’t seem to get past and feel like giving up. I myself was unsure how I would be able to get past the challenges but I kept on persevering and this is what led to my first break.

You’ve written for a variety of national and interview media, and are a published author – how do you switch up your skillset for working across different forms of media?

What attracted you to journalism as a career?

When I was 15 years old, I covered a story for my local community newspaper while in Sri Lanka when the tsunami hit the country. I spoke to those most in need who felt their human rights were being violated and I was able to give a platform for their voices to be heard. This experience ignited my love of journalism and is one of the reasons I like to focus on human rights and social justice issues. Even when I was young, I always liked to imitate being a news anchor – it was something that I had always wanted to do.

How do you balance your work with being an ambassador for Peace for the Universal Peace Federation?

Much of my work in journalism supports the ethos and values of the Universal Peace Federation and I have done quite a lot of peace journalism, stories that reflect interfaith understanding and contribute to the wider society. I think that there are many ambassadors for peace around the world who are working in their own way to promote the values of peace and tolerance.

Journalism is particularly difficult to break into, and stay in, in 2020 – would you still recommend it as a path for people graduating now?

I definitely would recommend journalism as a prospective career path especially if you enjoy telling stories. There are various different sectors within journalism that one could get into, be it print, online or broadcast. I think that there is loads of scope for people to use their skills to further excel within the industry and if it’s something they enjoy doing, they should go for it. Journalism is essentially about storytelling and I think it’s important that we have people from a variety of backgrounds and walks of life telling these stories.