What does the media think of prime minister Boris Johnson – and his policies – so far? 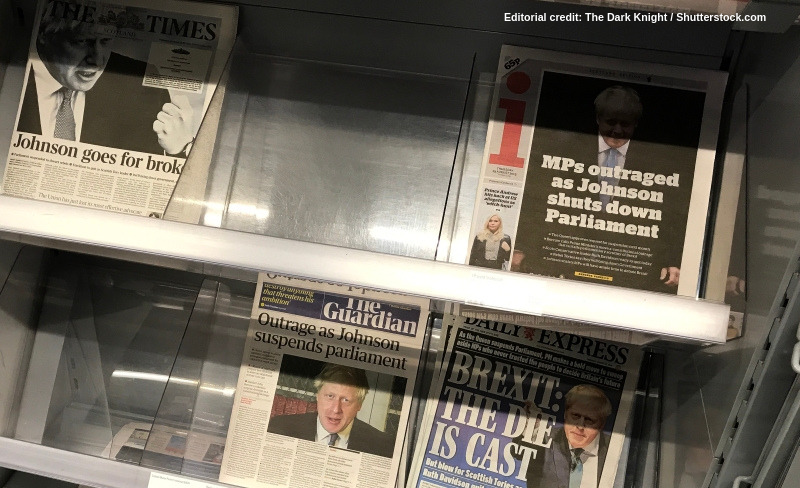 Boris Johnson as a columnist was no stranger to a vivid, even lurid headline, with highlights from his Telegraph career passing judgement on ‘A ploy to scare MPs’, ‘this toxic polarisation’, and ‘the biggest statecraft failure since Suez’.

As prime minister, he now finds himself the subject of this kind of media scrutiny more than ever before. Vuelio has marked his first 28 days in office with an analysis of the media’s reaction to 14 policy announcements, including the NHS, Northern Ireland and Brexit.

The 19th August letter setting out the UK’s commitment to leaving the EU and focusing on Johnson’s opposition to the ‘backstop’ was by far the most discussed topic during the 28 days, accounting for 24% of coverage of Boris Johnson from 19 August to 26 August. It was also one of the main drivers of negativity with criticism in both national and regional media. The Express was most vocal, while The Guardian was particularly critical in an opinion piece that opened, ‘If there is any fragile encouragement to be squeezed out of Boris Johnson’s letter to the European Union this week, it is perhaps the fact that he wrote it at all.’

The most negative reaction from the media – Northern Ireland

From 31 July to 8 August, 68% of media sentiment around the Prime Minister and Northern Ireland was negative, and just 4% positive, with Johnson accused of ‘threatening Irish peace’ while Sinn Fein demanded Britain offer a referendum.

While negativity surrounding questions over where the money for the NHS cash injection will come from, criticism from Labour for it not being ‘enough’ and headlines that the announcement was misleading drove significant negativity, this was still the second-most positive announcement with 45% of media sentiment being positive. This is thanks to a high share of regional coverage (65% of coverage was in regional press), which highlighted where the investment will help e.g. ‘Manchester to get new adult mental health care unit under NHS investment plans’ (Manchester Evening News, 05.08).

What’s next for media reactions to Boris Johnson?

The shadow of a general election, a flimsy parliamentary majority (lost within six weeks) and Brexit (https://www.vuelio.com/uk/blog/breaking-the-brexit-deadlock-what-will-happen-next/) have been a major influence in Boris Johnson’s policy announcements so far, with flagship election manifesto policies like law and order and the NHS accounting for five of the announcements. Media scepticism towards the early announcements has questioned the timing, where the money would come from or the agenda behind the investment. The first 28 days tell us that this prime minister has a lot of work to do in order to earn credibility with the media.

More on this analysis

The study analyses the media impact of announcements made by Prime Minister Boris Johnson in his first 28 days, including national, regional and political UK online titles, to identify key trends. Analysis took place from 24 July 2019 to 27 August 2019 and each announcement was analysed for one week after the initial news broke.