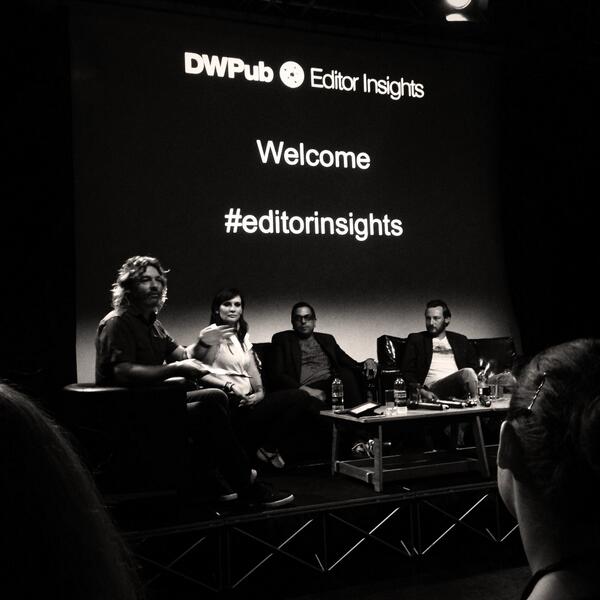 This week saw the first ever Editor Insights event from DWPub, which brought together a trio of journalists from different branches of consumer media to face an audience of PRs at Rich Mix in Shoreditch.

Master of ceremonies and DWPub founder Daryl Willcox led a Q&A. First on the panel to be grilled by Daryl and the audience was Genevieve Mullen, practicals editor of Real People and representative for traditional print media. Hearst stable-mate handbag.com was represented by editor Mango Saul, who was able to share insights into women’s interest digital media. Average Joes‘ Stuart Flatt completed the panel line-up to give perspective on men’s blogging. Daryl and the panel discussed the tailored approaches print, online and blog outlets appreciate from PR professionals, the importance of good old-fashion relationship-building, and what the future of publishing looks like.

The classic press release was considered by the panel, with email headlines agreed to be particularly important by all three journalists. A concise and clear approach in an email header, with references to specific pages or sections of the outlet being targeted, was preferred to attention-grabbing banter and casual references to the weather – as Mango put it “we don’t care if it’s raining outside”. In terms of press release content, two-thirds of our panel found statistics useful, while a survey releases were generally disliked and Mango would need to be grabbed by the headline. Imagery was agreed to be capable of ‘making or breaking’ a story in any medium, and therefore, making and breaking a press release (Dropbox was one of of the services preferred by all of the panelists). Genevieve said phone calls from PRs usually end with “send it to me in an email,” while Stuart, who works alone in an office, sometimes finds a friendly voice “good to hear”. The days past of recovering screwed-up posted press releases from waste paper bins following a phone call were remembered by former journalist Daryl (perhaps a little bit fondly).

Face-to-face pitching was lamented as being almost impossible for the modern journalist, whether in print, online or blogging. Stretched editorial teams mean less time for relationship-building with PRs and also for formal events. According to Genevieve “inspiration is hard to get these days”. Alternatives were banded by a few in the audience – skype, video press releases (the team had never received the latter, but were intrigued by the suggestion) and boxes of goodies sent to office desks – though for Mango “there’s no replacement for a boozy lunch”. This brought the team to a contemplation of ‘wining and dining’ (meetings over lunch were seen as good use of time) and the importance of product samples for each of the outlets – though they agreed PRs must arrange collection.

The increase of interactivity with readers was a theme that came up throughout the evening, with reader giveaways being a big component of Genevieve’s pages in Real People – “giveaways have merged with editorial” – and on the Average Joes blog. Mango agreed that competitions can “engage” the reader, but how can PRs engage journalists with their clients’ products? Spokespeople are less important to handbag.com readers. “People want us to be the spokespeople,” Mango said.

A mention of Mango’s time at Smash Hits (remembered with a nostalgic giggle from the audience) led us from the past to the future of print – what did our panel see in store for the publishing industry? Mango saw a future for print in ‘niches’, where Genevieve saw it looking like “the MailOnline, in print” – a heartening or depressing prediction, depending on your outlook. User-generated content, a natural follow-on from blogging – “everyone is a journalist now” – as well as “brand journalism” was predicted by Mango. With Hearst ‘brother’ brand Esquire recently branching out into a weekly digital format, apps, and spin-off fashion biannuals, the handbag.com editor saw a future of multi-channel outlets, and journalists working across them.

So, after an evening of mulling it over with our editorial panel and audience of PRs, print isn’t dead, neither is the humble press release, and the PR-journalist relationship continues to be important for print, online and blogs. As Mango summed it up: “PRs are pitching to editors, and editors are pitching to their audience… you know, we kind of need you guys.”