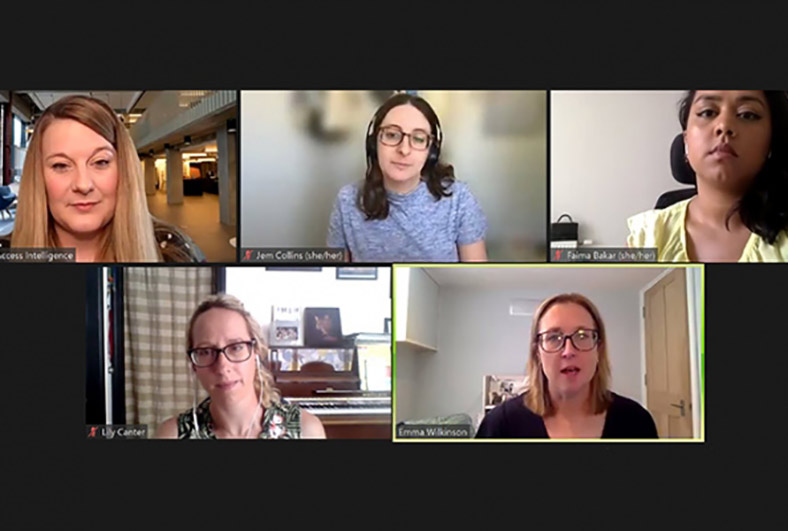 ‘It’s not all been negative – people have been more open to collaboration and new ways of doing things,’ is how Freelancing for Journalists’ co-founder Emma Wilkinson summed up working during the pandemic during our latest virtual event, Building better relationships between PRs and journalists.

Sharing their experiences and advice alongside Emma for the webinar was her Freelancing for Journalists’ co-founder Lily Canter and Journo Resources founder Jem Collins and senior staff writer Faima Baker.

Jem writes about lifestyle and human rights topics; ‘anything a bit quirky’; Faima covers topics including race, religion, culture and gender; Lily works a broad beat including money, health and lifestyle; and Emma has been specialising in health and medicine throughout her 15 years as a freelance journalist – each have continued to write throughout the challenges of the last year alongside their work supporting fellow freelancers.

‘There was a quite a lot of my working set up that didn’t change because I’ve worked from home forever. Though, admittedly; I wasn’t trying to homeschool children at the same time before now,’ said Emma on the challenges the pandemic brought to her working routine.

‘I’ve covered pandemics before – I covered Swine Flu – but this was really overwhelming. Trying to get all the up-to-date info on COVID. One thing that did change – I had to contact lots of press offices, NHS departments and think tanks, and they’d all started working from home. The systems they had didn’t shift over straight away, office numbers weren’t diverted at the start – that was stressful.

‘I have made three very good connections with PRs over this period, who approached me. It’s not all been negative.’

With the difficult parts – keeping in touch, dealing with sometimes unrealiable technology – has come positives – what changes are worth keeping, post-pandemic?

For Jem, it’s the flexibility:

‘There’s real polarization when we talk about new ways of working and whether working from home is better – camps of “we need everyone in the office” or “I’m never coming back”.

‘We call all be a little more flexible. I’d like that, from a journalist/PR perspective – offering that interview in a number of different ways; phone, video. More generally, I’m hoping for a bit more nuance with we’re able to help each other and deliver.’

‘I hate video calls,’ added Emma. ‘As someone who’s based far away from where most of the publications I write for are based, I used to get lots of “Let’s meet up for coffee,” assuming I was based in London. I’ve been able to connect with people I couldn’t before, sure – when I choose that as something I want to do, it’s good. It certain circumstances, it’s really opened access for me. I hope a bit of that hybrid model stays.’

‘We need more of a blended approach of in-person and virtual, going forward. It will take a while to settle down, I think. It’s all about flex, and people getting a better work/life balance’.

While in-person meet-ups and mingling at events hasn’t been an option, other ways of accessing relevant material for stories have taken their place. For Faima, it’s charities and organisations working in the sectors she cover have been vital:

‘I really like working with charities and orgs who have a good idea of what I’m after. Sometimes I’ll contact the same people for future stories, because they already know what I cover. I represent marginalized communities so make sure I’m put in touch with the people I’m writing about. Covering an issue without speaking to those you’re writing about can be really dangerous.

‘I was going to mention Facebook Groups as well,’ said Jem. ‘In terms of PR, you’ll be able to see from the pieces I share on social media what I’m interested in writing about’

And the advice for PRs looking to connect with journalists now? Keep it focused on what the journalist wants – nothing tangential to the topic:

‘When I’ve sent out a request through the Journalist Enquiry Service, responding to what has been sent out, exactly. Don’t use it as an opportunity to jump to something else. That sounds super simple, but I do get “I don’t have this, but I do have this” emails. Make sure you have what we’re looking for – it’ll help when we’re on deadline.’

Watch the full virtual event Building better relationships between PRs and journalists here and find out more about our collaborations with Journo Resources and Freelancing for Journalists here.

Want relevant statistics, expert comment and review products from UK PRs? Send your own request via the Journalist Enquiry Service.