Journalist as Author: Emilia Leese, Think Like a Vegan 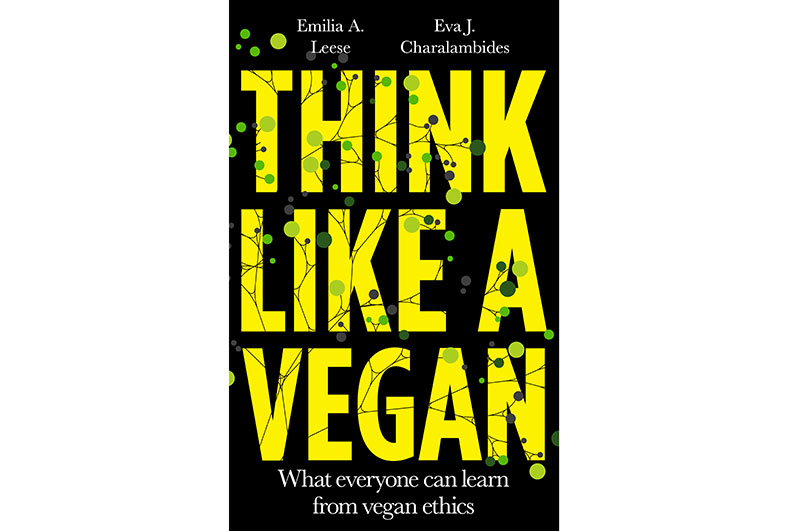 Veganuary has grown exponentially since its start in 2014, with 400,000 signing up to take part last year and huge numbers taking on the challenge for 2022. For journalist Emilia Leese, veganism is about much more than diet – her book Think Like a Vegan, co-authored with Eva J. Charalambides, asks the reader to consider the ethical decisions that come with living a vegan lifestyle. How can vegan ethics be applied in our daily lives?

We caught up with Emilia to discuss her book, Veganuary and her plans for a podcast!

Think Like a Vegan is a new, approachable and accessible, vegan ethics guidebook for anyone interested in veganism, its ideas and what anyone can learn from its practice. The book explores how vegan ethics can be applied to every area of our daily lives. It also examines a variety of contemporary topics related to animal use: from the basics of vegan logic to politics, economics, love and other aspects of being human. The book also includes a chapter on practical, real-life scenarios to help readers think about animal ethics.

Could you tell us about how you came to write Think Like A Vegan?

My co-author, Eva J. Charalambides, and I met several years ago at a vegan conference at the University of California, Berkeley over vegan donuts. Since then, we’ve been fortunate to meet regularly at vegan festivals in North America. I’d talk to hundreds of people in the festival’s ‘Why should I go vegan?’ tent. There, and generally in our lives, we’d both often get questions about veganism. Or we’d be introduced as the ‘expert’ on veganism. We realised there was a need for a way to empower people to articulate the ethical reasons for veganism and speak about it more confidently. We wanted everyone to be able to be an expert. We can all explain veganism to others when we have the tools. In writing Think Like a Vegan, our goals were twofold: to make the book part of a toolbox for vegans and a resource for non-vegans to understand the practice. And we believe we’ve done that.

How important do you feel ‘Veganuary’ is for promoting eating vegan food and also vegan ethics?

It’s been a boon for vegan food products and restaurant offerings, especially during the traditional down-time in January. This year, Veganuary has stepped up its ethics messaging and that’s good progress. Veganism is a philosophy and practice, so it isn’t something I believe should be approached as a ‘challenge’ for a limited time frame any more than feminism, for example, would be. I’m encouraged this evolution in messaging will continue throughout the year to educate on the core ethical aspects of veganism to sustain everyone who’s chosen to participate to continue being vegan forever.

Think Like a Vegan is launching in the USA and Canada on 18 January, so we’ve been ramping up for that. We’re also in the early stages of a Think Like a Vegan podcast with a real punchy and energetic format. Our rewilding project, Birchfield, up in the Highlands always keeps me busy, whether it’s learning about trees, fungi, animals, or getting involved with the community or with artists and filmmakers to create on site. And I’m continuing my love affair with London as editor of the quarterly magazine for the Heath & Hampstead Society, which has been immensely satisfying.

What advice would you give to other journalists thinking about writing a book like Think Like A Vegan?

Everyone likes stories because they speak to us personally. So, we have to figure out how to make a book, which could simply be about facts, figures and philosophy, be alive and personal. We found weaving in the personal with the message of the work is a powerful and effective means of conveying the message. Finding a supportive publisher is challenging and once you do, it’s an absolute blessing.

I always have a few on the go. Slaves and Highlanders by David Alston is blowing my mind right now by shedding light on the little-known history of how the lives of Highlanders were intimately connected to the fates of enslaved people in the Caribbean. I’m also reading the novel Women of Troy by Pat Barker. It tells the story of the women living alongside the ancient Greek vanquishers of Troy through their eyes instead of the men’s. It’s a gripping read. And I’m reading Animals as Legal Beings by Maneesha Deckha, which explores alternative legal classifications for animals and how those could alter our relationship with them beyond their current objectification.

Are there any other examples of your everyday journalism/writing that you’re especially proud of or would just like to share?

I’m really pleased with my most recent piece, Vegan Options: Beyond the menu, which I contributed to the winter edition of the magazine for Women in the Food Industry. The piece is a zippy summary for food industry folks of what to think about when designing vegan menus.

Via email at emilia.leese@gmail.com, or through Instagram, LinkedIn or my blog, Emi’s Good Eating.