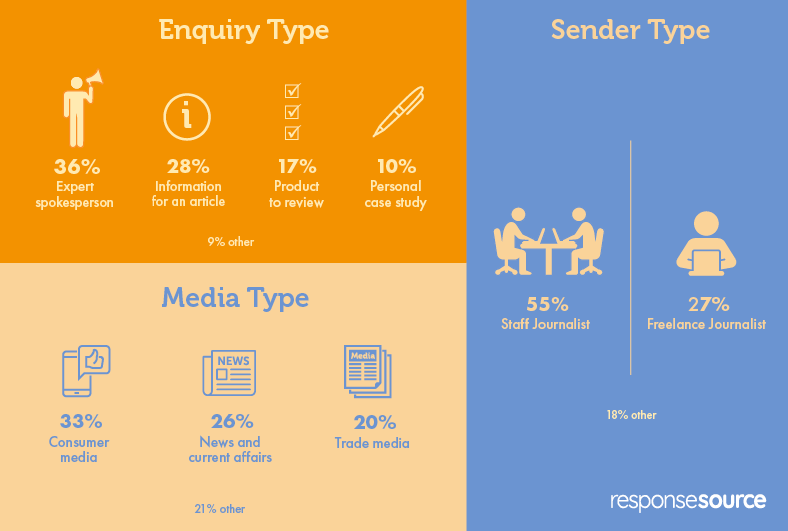 After two years of Covid, 2022 was the year many of us expected to get back to normal. Instead, the turbulent times have continued with the war in Ukraine, cost of living crisis and the outbreak of monkeypox. The first six months of the year have certainly been challenging for those tasked with reporting on it – with half of the year complete, we decided to look back at what the media have been looking for on the Journalist Enquiry Service.

The total requests sent via the Journalist Enquiry Service have risen 11.5% compared to the first six months in 2021, with January proving the busiest month so far. It was February, though, that saw the biggest increase from the previous year, with an increase of over 18%. Unsurprisingly, there has also been an increase in the number of unique users submitting a request. Every month has seen at least a 4% rise in different users sending at least one request with the largest gain coming in January, of nearly 10%.

The service, as it has been for several years now, is primarily used by consumer media journalists. 33% of requests so far have come from this media type, with national newspaper/current affairs not far behind on 26%. Trade/business/professional media is the third most common media type (20%) with blog at 8%. In comparison to the first six months of 2021, there has been a big rise in the number of requests from regional newspaper media. This has increased by 25% – perhaps to be expected, with furlough’s significant impact on regional press now (hopefully) a thing of the past. There has also been a rise of 21% for the national newspaper media type too – also reflecting a return to stability in the media landscape.

Despite the number of consumer journalists sending requests, seven of the top ten media outlets using the Journalist Enquiry Service are national press. If you expand the list to look at the top twenty, this figure rises to fourteen. Two consumer media titles make it into the top ten, and one trade title.

In terms of sender type, over 80% of requests come from either staff or freelance journalists, with just 8% coming from bloggers. The amount of staff journos using the service has increased compared to the opening six months of 2021, with a rise of 18%.

‘Spokesperson or expert’ remains the most popular enquiry type for journalists, comprising 36% of all requests. ‘Information for an article’ isn’t far behind on 28%, with review products on 17% and personal case studies on 10%.

The most interesting changes have occurred in the category choices on JES requests. 24 of the 25 categories have seen a boost in numbers compared to 2021. The motoring category has jumped up over 30% as journalists have looked to cover the fuel crisis and the rapid inflation of oil prices. The transport and logistics category has also seen a 29% increase due to the ongoing logistic issues that have occurred in the wake of Brexit. The cost-of-living crisis has been another major talking point this year, with several media outlets recruiting cost of living reporters to cover the issue. This has been reflected on the Journalist Enquiry Service with a 27% surge in requests for the personal finance category.

Since the height of the pandemic, many industries have been able to get back on track including the theatre and arts – that is echoed by use of the service, with a 23% rise in the ‘Arts & Entertainment’ category being selected. People have also been able to get back to holidays abroad but have had to deal with travel chaos and issues at the airports and strikes on the railway. It isn’t too surprising then that the Travel category has also grown in popularity, with 27% more requests than this time last year.

Covid does continue to make the news though and this coupled with the outbreak of Monkeypox and a particularly bad year for hay fever sufferers has meant a 14% increase in the use of the Medical & Pharmaceutical category.

With political uncertainty in the wake of the resignation of Boris Johnson, it’s hard to predict what categories will see the biggest changes in the second half of 2022. However, the Journalist Enquiry Service will continue to monitor what is trending – we’ll be providing a monthly round-up of the key words and topics the UK media have been using to give you an insight into what’s happening in your industry.