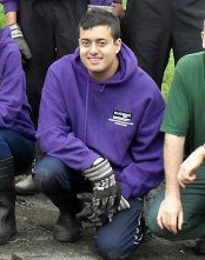 Burhan Khadbai brings a whole lot of history to his writing, having launched classical studies publication Mamucium while at The University of Manchester. More recently, Burhan reported on the current political unrest in Ukraine for The Lawyer before leaving to go freelance, and is now aiming for work to rival that of Peloponnesian wartime journalists (who were reporting in 431-404 BC – we told you there would be lots of history).

So, Burhan! You've left your reporter role at The Lawyer – what did you focus on during your time at the magazine, and what prompted your move onto other things?

I covered international special reports and regional law firms in the UK, so quite a broad beat! It was my first proper break into journalism, having graduated from university last summer, so it was a great hands-on experience. Unfortunately, there is no fantastical story behind my leaving. It was just a decision I made. I felt it was time to move on.

You did classical studies at The University of Manchester – law is quite a leap from that! How did you end up working at The Lawyer? Is law something you’ll be looking to write about in the future?

I guess anything is a leap from classical studies as it is quite a unique subject in that it does not have an associated career attached to it, like many others. People have gone on to do many things after classical studies, from writing Harry Potter to ruling London. I've enjoyed writing about the law, so I'm not going to rule it out.

You founded Mamucium at University, and also helped launch StudentMoneySaver.co.uk – any plans for more media outlet launches in the future?

I was very fortunate to be a part of the launch of StudentMoneySaver. It's a great idea and has done extremely well. It's got about 150,000 likes on Facebook which gives you an idea of how far it has come. I'd love to launch something in the future. The media is fast-changing, meaning you have got to think outside of the box, but there are also some exciting opportunities.

What does launching a publication involve, and what advice would you give to someone who has ideas for their own magazine or website? How should they get started?

Creativity and passion. If you have an idea, then go for it. Especially while at you are university when there is so much support available. When I launched my own magazine – Mamuicum – the steps I took were simple. I saw a gap in the market – there was no magazine for the classics department – so came up with the idea, got funding, and there was so much interest.

Lots of diverse publications are launching digitally, but the print media market is rather fixed and unchanging in its reach (and audiences being targeted). Do mainstream media outlets need to work on being more diverse in their reach, or should those not being represented in the mainstream branch out themselves?

Great point. I think it's up to the media outlets. Diversity in journalism is a big issue and something I feel passionate about. The concept is so clear – the media is meant to reach out to the public, so if it is not being represented by the public, then how can it do that? I still feel journalism is massively unrepresentative but hopefully this will improve. Scholarships like the George Viner Fund and the Journalism Diversity Fund are playing a key part in helping this, but it's up to the outlets at the end of the day.

What are you hoping to work on now that you’re a free agent? Are there any publications in particular you’d love to write for? What kinds of topics will be your focus?

Continuing with legal journalism is an option. But as a reporter for international special reports, I've built knowledge of political and economic issues as well as legal issues of various countries. So that's another area I want to explore.

What’s the most memorable work you’ve done so far in your career?

I really enjoyed writing a special report on Ukraine at the end of last year. At a time when there continues to be a mass protest against the government, it was very interesting to hear from lawyers in the country – with some of these law firms so close to the protests – about how it was affecting them and what was going on.

I'd love to do some documentaries on the classical world. I think what the BBC is doing to promote the classics is really good. The chance to work with Mary Beard would be amazing.

PRs are the main point of contact for journalists, so very useful. From arranging an interview to getting information, they are the source.

Do you find press conferences, trips, parties and other events useful?

It's very important for PRs and journalists to not only work together but to understand the needs of each other. The only way that is going to happen is by the two meeting each other and networking. At events like these when journalists and PRs meet – not only is it fun but it's essential. It's part of the job description for both. A quote from my previous boss that has stuck to me is "journalism is not a 9-5 job".

You previously tweeted @TheLawyerBurhan – will you be joining Twitter again?

I've replaced my username – I can be found on @BurhanKhadbai. Feel free to get in touch.

I'd go to the Peloponnesian war and be a journalist rival to Thucydides. There is a very strong argument to be made that Thucydides was the first ever journalist. 'The History of the Peloponnesian War' is essentially his account of the war as a correspondent or reporter. But it is the only source we have on the war, so we don't know how much of it is true…

Burhan can be found tweeting @BurhanKhadbai. No word on whether Thucydides is tweeting yet.