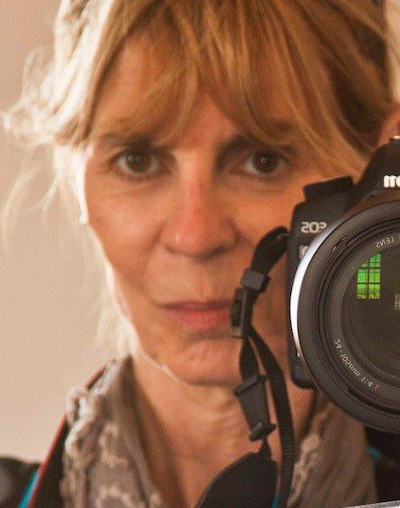 Hi Glyn, tell us about your work as a freelancer, and where we are most likely to see your work?

I’ve been freelancing since 2007. My first independent work was a feature about the young Afghan MP Malalai Joya for The Telegraph Magazine. At that time she was in hiding after surviving several assassination attempts and my meetings with her in Kabul always involved body searches, and several changes of vehicle and location. I was lucky enough to be accompanied by a good friend and great photographer Tom Stoddart, who had hugely influenced my decision to stop being a wage-slave. The freedom was heady and I have never regretted ‘jumping ship’!

Since then I’ve also written for the Daily Mail, the London Evening Standard, The Independent, Marie Claire, The Guardian and several specialist publications. I’ve always been a writer, but freelancing gave me the time to develop complementary interests in film and photography. Because of this I was able to make further overseas trips, to Beirut, Afghanistan, etc. as a solo video-journalist. My documentary about an Afghan rape victim ('Samia’s Wedding') was used on Channel 4 News and replicated as a newspaper feature for The Independent.

It’s hard to get freelance commissions – and even harder to get ones that are good for the soul – but I won’t do anything that I’m uncomfortable with or doesn’t inspire me. I provide part-time media support (filming, writing, photography) for two charities and contribute regularly to the online magazine UK Progressive, whose editor is wonderful and never tinkers with my copy! Sometimes getting published is more important than getting paid.

In recent years I’ve done a lot more film and am associated with an independent production company that specialises in charity, corporate, newsroom and personal history films.

Friends and structure are important; sometimes I work from home, sometimes at one of the charity’s offices and frequently ‘on the hoof’. Being driven by what interests me is a double-edged sword though; it’s easy to become absorbed and insensitive to other people’s needs.

A long story, but freedom and integrity had a lot to do with it. Happily I was secure enough to be able to do it without starving or having a negative impact on anyone else’s life!

Since you started working as a journalist, what changes have you seen in the industry?

Where to begin? In no particular order: more people chasing and fewer jobs, the rise and rise of ‘academic’ qualifications in journalism, a legion of wannabe photographers and journalists who want instant gratification but are too impatient to put in the time learning the craft, management structures that put more emphasis on quick turnaround than accuracy, a belief that research is spelled ‘G-O-O-G-L-E’, citizen journalism, technology that moves faster than the people who try to use it… and in ethical terms, a media capable (and occasionally guilty of) exercising power without responsibility.

On the positive side, it’s good to see organisations like DART and The Rory Peck Trust looking after the wider interests of the profession.

What is the most memorable work you have done?

To whom? My readers or me? Very different. My first front-page splash and byline? I’ve forgotten what it was about, but not the rush it gave me to see it! My first story from a war zone, which would have been the Former Republic of Yugoslavia? A feature involving an interview with Dr. Pauline Cutting that was never used by mainstream media? Or perhaps one of the many pieces I have written on the plight of Afghan women?

A more recent ‘revisited’ piece was the 20th Anniversary of the Siege of Sarajevo, which got worldwide coverage through Marie Claire. The magazine commissioned Tom (Stoddart) and I to revisit the women he had first photographed two decades ago at the height of the siege. It was an experience both uplifting and sad.

I don’t have any heroes or heroines and as admiration can make interviewers diffident or sycophantic, I don’t even have an aspirational subject. Events create opportunities – priorities change all the time.

On your website it says you spent time running civilian/military news teams in hostile environments – tell us more about that?

I was in Bosnia/Croatia for several months towards the end of the Balkans Conflict and immediately after the Dayton Peace Accord was signed. At that stage I was a ‘poacher turned gamekeeper’ – a civilian journalist employed by the MOD/Armed Forces in a Media Operations role. I was responsible for news gathering about any issue that impacted on NATO troops and had a roving brief that took me everywhere: Sarajevo, Bihac, Mostar, Tuzla, Gornji Vakuf, etc. It was a devastated and dangerous place, but the resilience of the people who survived was astounding. It was my ‘first war’ and I will never forget it.

The experience informed all my future perspectives of post-conflict tragedy. When I came back people asked me if I’d been afraid. My answer was "occasionally, but more by seeing what man is capable of doing to his fellow man than by being injured". Sorrow and anger are more enduring than fear – and when I do serious work, I focus obsessively on the job.

Do you think there is enough coverage of gender and human rights issues in the mainstream press?

Women have been victims and weapons of war from time immemorial so while I’m sad in a way that ‘gender’ and 'human rights’ have been separated into two issues, the fact is that women (children, the old, and the weak) are often in double jeopardy.

The volume of coverage is considerable; bloggers, NGOs, charities, the UN, mainstream and niche media collectively produce extensive coverage. The skill lies in making it relevant, targeted, and powerful enough to both move non-stakeholder audiences and stimulate political action. This means sustained commitment by at least one mainstream news platform – and sometimes a lot of luck!

Cynically, I believe that the market will only bear so much about one tragedy and have been told on a number of occasions that publications have ‘done’ women in Afghanistan/Rwanda/Sudan, etc. Each new conflict, after the breaking news has been delivered, opens a window for some ‘humanitarian follow up’ – but it doesn’t remain open for long. The Millennium Development Goals for women that were much vaunted when Western troops went into Afghanistan are hardly mentioned now and it is clear that many of the fragile freedoms that were achieved are already being eroded.

Having reported from a variety of different countries, what differences have you seen in the journalism industry globally, especially in regards to freedom of press?

Many Western journalists take their opportunities for granted. Even the freedom to travel beyond their own borders is denied to colleagues from some countries. Growing numbers of women in countries like Afghanistan, Saudi Arabia, Iran, etc. want to work as journalists; once again they – even more than their male counterparts – face cultural and political difficulties that make this daunting.

Do you find social media useful in your work?

PRs who scattergun the same material to freelancers and staffers are probably wasting their time. I will consider anything that captures my imagination if it is targeted, comes with exclusive access and funding and/or a commission. Email is almost always the best way to make initial contact with me – glyn@glynstrong.co.uk.

No. I’m usually too busy to go to things that don’t chime with my core interests and other commitments.

Everything – TV, films, books, blogs, newspapers, magazines, talks. Default position is I never go anywhere without a Kindle and an iPad/phone. Relying on information from a single source is as dangerous as it’s dull.

Glyn can be followed on twitter via @glynstrong, and her site can be viewed here.