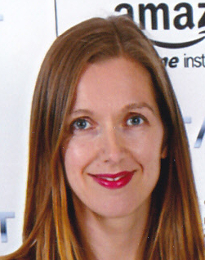 "There was a gap in the market for actual happy news – there's already so much that’s negative, so we decided to go down the route of being very upbeat," says today's interviewee Julie Gilbert on the modus operandi of BrightShinyNews, named for its bright and shiny outlook on entertainment news. After 12 years in the media industry, Julie's positive light remains undimmed: "you’ve always got to have a unique selling point, and we wanted people to come away with a bit of escapism. It’s more about making our readers look forward to coming to the site, without going away thinking it’s all a bit of a disaster out there."

So are things bright and shiny out there, or disastrous? How do you deal with a mad Mila Kunis? And could Julie ever be turned to the dark(er) side of celebrity news by a killer exclusive?

BrightShinyNews seems to be very different to big women’s interest brands on the newsstands, as they can get rather negative towards celebrities…

Yeah, and I think we’re bridging a gap in the market, because although a lot of people like negative stories and it makes them feel good about themselves, a lot of other people want to read happy stuff, their escapism needs to be pure – nice stuff. You need stories to make you think ‘things are going to get better’. And it’s been hugely successful – we get loads of comments from readers who love the way that we write and love that we aren’t negative, it’s all good fun stuff.

Does that fit in with advertising on the website? A lot of women’s interest publications will have quite negative stories about the way women in the public eye look, so they can then tie it to products they cover later in the issue.

Yeah, I mean, mainly our advertising will be products. We have reviews, an editor’s column, what’s on our radar this week, we compare the beauty products we love, that we rave about. Or maybe we’ve been to a movie and we love it, or a new bar or restaurant is opening, that kind of thing. Our adverts are based around that kind of thing as well. We have stuff on the site that we’d recommend as much as possible, so if there’s great clothing brands we like, we’ll have adverts for that; if there’s beauty products we like, we’ll like to have that as well.

So do you have a lot of interaction with PR companies for products, and celebrity access?

Yeah, we deal with PRs on a daily basis. It’s great to hear from PRs, we love getting emails – that’s the best way for them to get in touch with me, with a great subject header about the product, and all the information, images, video. That’s the best way to get on my radar.

We go to lots of events as well – we’re always happy to go down and discover new products, remind ourselves of old classics, and openings, that kind of thing.

And with celebrities, we do get invited to lots of red carpets, and we can do a lot with that, editorially. With a movie premiere, you can cover the movie, you can do Cameron Diaz in a beautiful outfit and compare it with a high-street example, and PRs can send us ‘get the celeb look’ stuff. A lot of interaction with PRs is really essential for this job.

Do different members of your editorial team deal with different sections?

There is a real mix, actually – we do all have topics that we write on, but all pitch in when there’s a lot going on. For example, The Baftas – there’s a lot of content there. You’ve got to deal with the stars, also the fashion for the style section, entertainment news about who’s won what award, and then just general gossip from the night.

For events, it’s always good for two of you to go along, whatever it is, because you can cover everything, and you’ve got two aspects of it. If it’s to review a movie, one person might like it, the other not so much, so it’s good to get two sides. And because we're BrightShinyNews, we’d only want to cover something we actually enjoy.

If a freelancer has an exclusive, that’s perfect for our site. And because we’ve all been doing this for years here, we’re very happy to help people out. You’ve always got to get that step on the ladder, so we’re very happy to bring interns in, or get people in to write. We have had people ask if they can write one or two articles for us, just as a contributor, just to get some experience and we’re more than happy to do it – we can give them advice, too. It’s about giving people opportunities just like we were given opportunities when we started out.

There’s news going up online constantly, all the time across the world – it sounds like your job isn’t a nine-to-five office role. Do you have to keep an eye on Twitter to ensure you’re covering news as it happens?

Totally; we are on social media 24/7 – all the time that we’re awake there’s someone looking at it. News doesn’t stop. News from Hollywood starts coming in at five in the afternoon, so we’ve got contacts over there feeding stuff to us. Social media is great because you can have alerts sent to your phone – you can be out at dinner and post breaking news straight away. Readers don't want to wait until the next day to find out a breaking story, so I always carry around a Netbook. If something big happens, I can report on it straight away.

If you want to do this job, you have to accept that there are going to be long hours. But there are benefits as well, because you’re reviewing movies, you’re going to product launches. It’s not like you’re working nine-to-five and then you’re doing work afterwards. You still get to enjoy things. And if you love entertainment, style and beauty, it’s the perfect job.

You’ve interviewed lots of people in your career. Who have you found most interesting to talk to?

That’s a tough one, everyone has a different story to tell. Who was really interesting… I interviewed Paul Daniels when I was at Living TV (he was on a ‘Four Weddings’ celebrity special). I thought “he’s going to be really boring, he was a magician back in the 80s – he won’t have much to talk about apart from magic”. But he was a fascinating man! I was completely proved wrong about him, he’s been the most interesting.

I’ve had a few difficult ones… everyone I interview, I do a lot of research first, find out what I can about them. If you throw interesting questions in, you can get an interesting interview from anybody. It’s great to ask a female celebrity what she has in her handbag, and it can be quite surprising what they have in there! If you’re talking to a celebrity on a day where they’ve had 25 interviews before they’ve got to you and you say ‘so what’s it like working with your co-star?!’ you’ll need to wake them up a bit. If you throw random questions in at the beginning you’ll probably get better answers about the movie they’re promoting, or the album. You’ll make them more alert.

Talking of difficult ones, that's reminded me of a recent Star-Ledger interview with Mila Kunis that started to go wrong (maybe the questions weren’t particularly interesting, and she’d been at a junket for a long time) – how would you ease your way out of a situation like that?

I always have about 30 questions in my head – sometimes you can only ask five, because someone will give long answers, but I’ll always have spare. I did interview someone who was very difficult and didn’t like my line of questioning, and gave me very, very rude answers, but I just laughed, and that sort of softened them, perhaps? I thought, I’m just going to laugh now, because you obviously don’t like my questions, so I’m just going to pretend to be a dizzy blonde (I was blonde at the time), and pretend that what you said was funny, and just move on.

Yeah, there’s certain questions I’d steer clear of, I mean, if I was interviewing Mila Kunis, I probably wouldn’t ask about Ashton Kutcher. There’s always questions you shouldn’t ask, but people do. That’s why I like working on BrightShinyNews, because it’s not about trying to get the dirt on someone – when I interview someone, I want them to be very comfortable and be okay to talk to me. I want to put them at ease, and then I think you don’t come into those problems. But, like, you say, if Mila Kunis is bored, then you have to make sure you won’t make them even more bored.

Which celebrities do you cover a lot on the website – who fits in best with the positive tone?

We cover a lot of Hollywood stars. Angelina Jolie, for example, whenever she’s in the media now she’s doing something positive, so stories about her do really well. And then there’s Justin Bieber…he does well! I mean, we have to tread very lightly with him, because there are a lot of negative stories out there at the moment about him! But we have a lot of followers that love Justin Bieber, and they retweet our stories, so we must be doing something right there. And Johnny Depp always does really well. Stars that don’t have a lot of stories out there about them do really well – people are curious to hear about them.

You have to keep everything bright and shiny in your job and be positive – there must be a lot you see that is negative and you can’t write about it. Is it hard being positive all the time?

With some negative news, you can turn it around! Someone might have split with their girlfriend – and a lot of our readers are women – so we might make a joke about that person being back on the market again. But normally when we write about a couple splitting, we try not to say anything like ‘we’re not surprised they split up, because he’s boring’ – I think a lot of magazines will just be very negative. That’s a reason I like working here, because I have written for places where you are almost forced to be quite sarcastic about people, because that’s the tone of voice of the place you’re working for, and you don’t feel great about it. I can put a piece up now and I feel good about what’s written there, I don’t feel guilty.

If someone came to me with an exclusive about a celebrity, and it would hurt them, no matter how many millions of page views we would get from that piece, I would not break the story. Because that is just not how our website works. We don’t want to hurt anyone! It just wouldn’t work.

Julie can be found tweeting @astridgilberto.