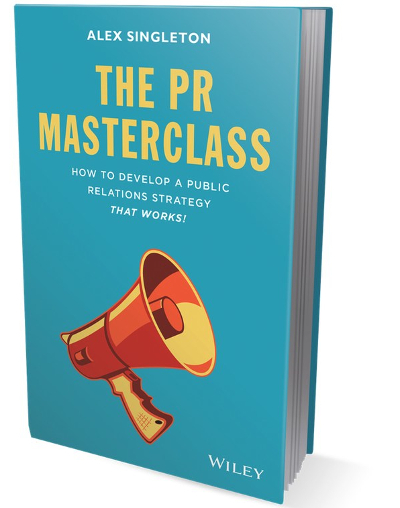 Tell us about your book, 'The PR Masterclass'. Who is it for and what is it about?

'The PR Masterclass' is aimed at PR professionals and business owners who are keen to understand what journalists really think. It’s a guidebook for those who want to get more media coverage and get it consistently.

It looks at how to develop consistently newsworthy stories, write the most effective press releases and develop high-level relationships with journalists. There are also chapters in the book on dealing with broadcasters, writing powerful comment articles and influencing public opinion with letters to newspapers. And if you’re looking to hire an agency or consultant, it gives advice on how to do this properly.

As a PR trainer, what are the common mistakes you see PR professionals make with their strategy?

PR teams can get too focused on the needs of their clients or employers, but not on the needs of media outlets. And when they fail to achieve the level of coverage they design, there’s a danger of blaming the wrong targets – normally the junior PR staff who’ve been told, unwisely, to cold call reporters and say “Did you get my press release?”

The big question: how can a company achieve the right press coverage for its needs?

All good media campaigns should begin by setting measurable goals. For a smaller business, that might be as simple as saying that it wants six good third-party endorsements in a year. These could include reviews in trade publications and on prominent blogs, collected so that they can be quoted in direct marketing.

For a large business, it might mean specifying the return on investment that’s required. I talk in the book about how companies such as Procter & Gamble do “marketing mix modelling” to separate the financial returns of PR campaigns from those of other promotional activities.

What do journalists want? As a former journalist, what are your tips to ensure PR professionals do not waste the media’s time, while getting good coverage?

The main thing journalists want is more money. But, of course, you can’t offer that. What you can do is invest the time into finding out why the readers are buying a publication and what their interests are.

The PR world is divided into two types of people: fantasists and realists. The fantasists believe that they can “wing it”, by spamming boring press releases to journalists they’ve never read. They think they can spend 20 minutes on Google research, write an article for a client, and then pitch it as “thought leadership”. And they think that when they can’t get any coverage, it’s the fault of the journalists.

The realists know that they need to understand deeply the publications and writers they are targeting, and develop relationships with them. Every time they ring a media outlet, they give genuine value. The realists are creative, knowing that journalists aren’t interested in a vendor’s needs, but in the needs of readers. And they know that PR these days is constantly evolving and that without continuing professional development, they’ll fall behind.

How does a company decide whether to do its PR in-house or take on outside help from agencies?

Many companies use a mix of in-house and agency support. There are three good reasons for using an agency. Firstly, agencies give flexibility: you can buy in more help for a major product launch, and then cut back a month afterwards. And it’s easier to fire an underperforming agency than an underperforming employee.

Second, an agency can give you access to specialist skills that would be too expensive to employ full-time – for example, someone who works exclusively on crisis communications.

What advice would you give to recent business startups or entrepreneurs on their PR strategy?

Be fun and show some personality. I talk in the book about a microbusiness called All About Tea, which has a tea factory in Portsmouth. Last year, it created the world’s largest tea bag, which was unveiled on the HMS Warrior. This was covered by television news programmes and in the local press.

The firm is a journalist’s dream because it is very open about what’s happening in its factory, and it knows that conflict is at the heart of all interesting news. When the owner’s dog was swiped, details were circulated on the company’s Facebook page and eventually the dog was returned. And when a thief broke into the factory shop and raided the till, Facebook was used to share the CCTV footage, helping the police to catch the crook. The story was picked up not just by the local press by also by the BBC and ITV.

The result is the company has a growing base of customer fans – including a musician who, unsolicited, wrote and recorded a song about the firm.

Some startups try to sound “corporate”, but who wants to buy from a boring firm?

From a PR agency perspective, when is it appropriate to say no to a client?

PR practitioners are professionals: it’s their ethical duty to tell clients when an approach won’t work or crosses a moral boundary. What’s more, it damages their own reputation when they spam journalists with badly conceived press releases, sent out simply because they were obeying a client’s instructions. There is a danger that journalists then block all their future emails and stop returning their calls, because they surmise that approaches are likely to be worthless.

The best agencies know when a relationship with a client isn’t achieving its intended goals and walk away amicably.

Good PR teams bring creativity. That’s why I love Ogilvy’s campaign, The Gnome Experiment. The agency’s client makes scientific weighing scales. Most PR people would regard that as a very boring product to promote.

Well, it turns out that the world is not completely spherical, which means that objects, on ordinary scales, weigh a slightly different amount depending upon where they are located on the planet.

Ogilvy devised a website where people could volunteer to borrow a pair of the scales and a garden gnome. A gnome’s arrival on the South Pole grabbed substantial media coverage. The experiment was covered on major channels from the BBC to Canada’s CBC News and Australia’s ABC, and in publications from National Geographic to The Times. By the end of the first week of the campaign 1,445 sales leads had been generated.

In some parts of the PR industry, there is bad practice going on, from fake letters to local newspapers pretending to be from residents, to the purchase of social media followers. But membership bodies, such as the PRCA and the CIPR, play a vital role in raising the profession’s standards.

What crisis management would you give to a company with a reputation that had been shattered?

Every crisis is different, so there is never a template you can apply identically to every company. Most crisis comms training is stuck in this clichéd world in which you are “doorstepped” at home by a pack of journalists and press photographers. But, unless you’re a celebrity, or are served by a really dysfunctional press office, this is something you are unlikely to face.

Managing crisis communications effectively is about dealing honestly and speedily with journalists’ calls and making tough decisions that save the company’s brand, even if it causes a short-term loss. Having well-trained, empathetic executives who can go on television is vital. Where the company is to some extent at fault, executives need to say the most important word: sorry. I am normally an advocate of doing something striking and large to signify that the problem won’t happen again.

How is the media changing, and how can PR professionals best react?

The media is globalising. This is particularly savage for American city newspapers which once practically had local monopolies. They now find their readers logging on to read not just internet-only news sources, such as The Huffington Post, but also to what international sites such as the Daily Mail, The Guardian and The Telegraph are saying.

Social media is obviously important to PR professionals, but far from destroying conventional media outlets, it is actually helping them. As Martin Clarke, publisher of The Daily Mail’s website, says: “Facebook isn’t a threat or a parasite but a gigantic free marketing engine.”

Conventional media sources that have strong brands will continue to grow their reach internationally. But weak brands will disappear. That doesn’t mean that PR people should stop thinking about conventional media, as some social media gurus believe. But it does mean that they should be aware of readership or viewership figures. The same applies to social media: if you’re doing business-to-business PR, Twitter is probably far less useful for reaching your target audience than LinkedIn.

How can PR activity be measured to ensure it achieves tangible results?

In the old days, PR professionals used measures such as number of press cuttings and advertising value equivalency. The problem with these is that they don’t necessarily tell you if the coverage is doing you any good.

Better tools for PR measurement include opinion polls of awareness and favourability towards the brand (taken before and after a campaign), microsites for particular PR campaigns (allowing you to count responses and subsequent sales) and “How did you hear of us?” questioning when people buy.

Alex has his own website at alexsingleton.com and can be found tweeting @alexsingletonuk.