The Next Generation… of journalists: Insights from the up-and-comers 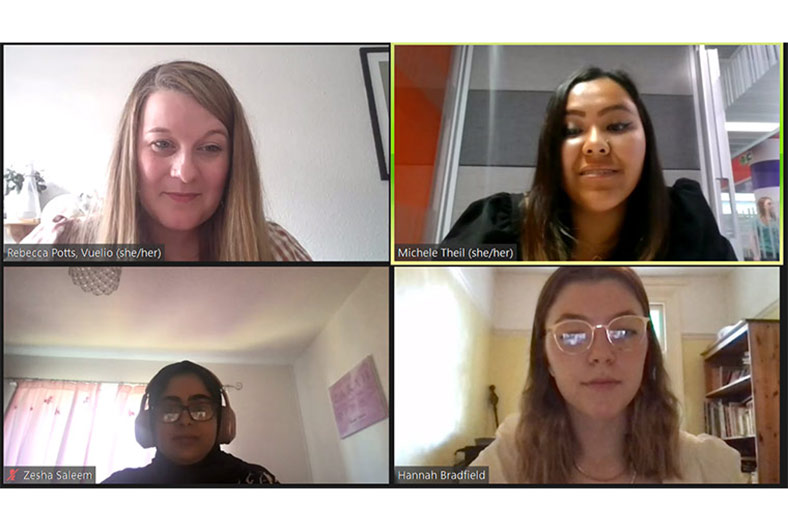 Journo Resources trainee and freelance journalist Hannah Bradfield happens to fall into the under-25 age group that puts her in the Generation Z bracket. Just as features about millennials have taken up plenty of column space and broadcasting time over the decade, it is now the turn of the next generation.

Luckily, Gen Z themselves are making their way into editorial teams and getting bylines of their own. Hannah, Zesha Saleem and Michele Theil joined us for last week’s Vuelio webinar ‘What’s Next? The new generation of journalism’ to share their experiences as freelance journalists making their way in the modern media industry.

Generation Z? What does it mean, exactly?

Michele Theil is currently contracted at the BBC and has regularly freelanced for outlets including VICE and The Independent. Far from seeing herself as a ‘Gen Z Journalist’, Michele doesn’t really think about it much:

‘It’s more of an in-joke with my friends. There is an argument that I’m more of a ‘Zillennial’… PRs and commissioning editors will target ‘Gen Z culture and writers’, and technically I am classed as that, and well-versed in that, so it makes sense. But there’s such a large spectrum within the category. Sometimes if someone’s referring to me as that, I can be a bit defensive…’

Fellow freelancer with bylines at The Guardian, British Vogue and Metro Zesha Saleem feels the same way – Gen Z is a broad, and vague, descriptor:

‘I’ve never really thought about it before. In my head, Gen Z sounds younger. When you say it, I think of people younger than me, like my younger sister.’

English Literature class is frequently a catalyst for future writers. Great English teachers are still sparking many future journalists to find their calling…

‘English was always my best subject,’ says Michele. ‘When I joined Uni, I wasn’t in the best place mentally and someone suggested I joined the student magazine. I had the most fun of my life – I very quickly became an editor of the sports section, moved my way up and decided ‘this is what I want to do’. I love finding out new things – this is it for me.’

‘It was my best subject, too,’ said Hannah. ‘I did Sports Science with English. Loughborough was a really cool place for Sports Journalism. I’ve always loved writing and talking – I always got moved in every class! I just love writing, talking, storytelling – helping other people tell their story.’

School time writing was a gateway for Zesha, too – ‘I did enjoy writing in high school; wrote for some student publications. I didn’t know how anything worked when I got started, but pitched and got a commission – I didn’t have a plan.’

Perception vs reality of the industry

That the UK media industry has traditionally been (and often continues to be) mainly ‘pale, male and stale’ hasn’t gone unnoticed by Zesha, Hannah and Michele:

‘Growing up, I would always try to look for journalists that looked like me. But there wasn’t many who wore headscarves when I was younger,’ says Zesha.

‘Writing was a lot of fun, but it always seemed to me to be impossible to get a career out of it. I entered journalism after the murder of George Floyd and the growth of the Black Lives Matter movement around the world – suddenly there was a lot more awareness around diversity. Editors were becoming more aware of the problem with the lack of diversity in journalism’.

Michele added: ’The media has been very pale, male and stale and, to a certain extent, it still is’.

Michele’s inspiration to get into the industry was sparked by the media’s own highly-cleaned-up portrayals of itself in movies and TV. Not strictly true portrayals, perhaps, but they provided a door to a variety of possibilities:

‘Romcoms like Bridget Jones made journalism look glamourous and so cool. There are so many different types of journalism – I didn’t know that before. You can be a lifestyle journalist, and that doesn’t make you any less than a politics or investigative journalist.

‘I can tell that my friends are very confused by journalism, and there was a time when I didn’t understand it either. There are so many interesting ways of becoming a writer, a journalist – so many stories to tell. It is very difficult to make money and make a name for yourself, but that doesn’t mean that you can’t.’

Hannah agreed: ‘I didn’t realise how many avenues there were to explore. But you have to be so resilient.’

In a word – yes. At least to Zesha, Michele and Hannah, and likely many others not used to millennial-style coffee meet-ups, or Generation X-era chats down the pub, 90s’ networking style.

‘I think our generation are a lot more on email,’ says Zesha. ‘We prefer to shy away from real conversations, and the phone. But it can add another part to the dynamic…’

‘Building long-term relationships with PRs is great,’ adds Michele. ‘It’s difficult for freelancers when we cover a lot of different topics, though. I’ve worked a lot of random hours – I can’t run out of my day.

‘Also, I have this weird thing – when PRs offer to pay for everything? I think that’s nice, that’s lovely… but it makes me feel a bit awkward? I think it can be really awkward for people of our generation. “Let me buy you a coffee”. Like… why?’

For more from young journalists making their way in the industry, check out our interview with previous Journo Resources trainees Tom Taylor and Fern McErlane.